She wants to go. He wants her to stay. Neither gets quite what they want.
READ REVIEW
Next Previous 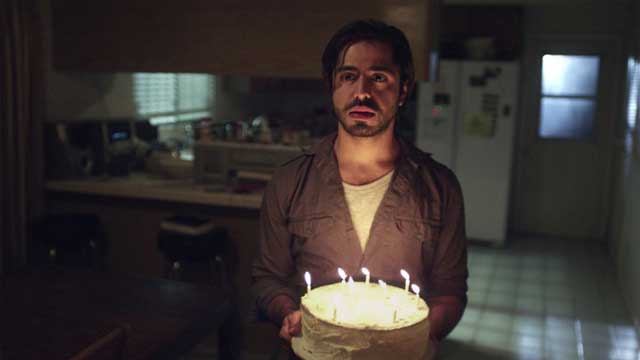 Exploring that frantic moment when a relationship ends and partners go their separate ways, Weighting is the tug-of-war tale of a dividing couple – one determined to leave, the other fighting for her to stay. Written, directed, and scored by Dustin Bowser & the rising indie darling Brie Larson, Weighting manages to encapsulate the anticipation, denial & acceptance of a break-up all within its brief 4 minute duration. Even managing to make it feel somewhat poetic along the way, with snappy dialogue exchanged between the ex-lovers as they debate the final moments of their split.

“It would never work work. My legs are longer and my gait is naturally quicker than yours.”

Meticulously choreographed, Weighting was filmed and edited to look like one continuous shot (it’s actually two) – a visual style that completely embodies that dizzying moment when a relationship finally falls apart. Daniel Kenji Levin’s camera gracefully orbiting the collapsing universe of this uncoupling, as Larson and Satya Bhabha rhythmically exchange opinions on the future of their relationship.

Apart from actually ripping Larson’s leg off, the directorial duo tried to ensure their film used as many in-camera tricks as possible to portray the crumbling world of their protagonists. And it’s in the attention to detail where this film succeeds, as cakes complete with flaming candles are literally packed into handbags. The subtle and restrained visual fx that are included in the film were all completed by Bowser, who described the post-production process as the “longest amount of time versus finished screen seconds of anything I’ve worked on so far”.

It’s never easy when a relationship ends – promises are broken and ties severed and Weighting perfectly portrays this raw moment in a dramatic and captivating fashion. If only all break-ups could be this beautiful.