Stuck in the doldrums of his daily life, Philip comes home to his apartment to find his world turned upside down.
READ REVIEW
Next Previous 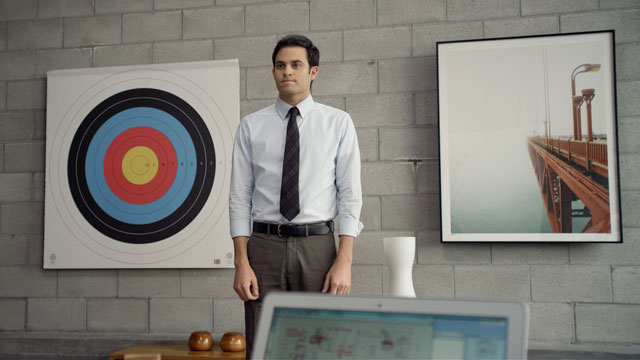 Confession time: when a film that’s over 20 minutes comes in through our Submit a Film page, my eyes tend to glaze over a bit. Let’s be honest—on the internet, 20 minutes is a lifetime. So, as I started to watch Table for One, I was admittedly skeptical. But, just a few short minutes later, I was hooked. Bolstered by very strong performances and a keen visual style, Table for One is a polished short—a story about longing for something more, about the interminable waiting game of life.

Philip is your average guy with average, boring problems. His career is stalled, his love life non-existent. He’s stuck. But, upon returning home one night after work, he finds his apartment magically transformed into a restaurant. Soon enough, he is once again waiting—this time for a table in his very own living room.

The film’s high concept becomes an obvious metaphor for life—about being forced to wait your turn through a seemingly endless song and dance of ass-kissing and people pleasing. We wait and wait as life continues to go on. What does it all mean?  When is it going to be my chance? When is it going to work out for me? Sure, when written down those sentiments seem so selfish, but who here can’t relate? It’s human to want something more, to get frustrated by the stagnant routine. Playing with its clever premise, Table for One is peppered with hilarious moments. It’s also surprisingly introspective—Philip’s journey of self discovery is relatable and poignant. Yet, at the film’s conclusion, the filmmakers give our protagonist a glimmer of hope, albeit a small one. Much like in real life, the events that can potentially incite big change usually start in the most seemingly insignificant and unexpected of ways.

Directed by Jesse Coane and crafted by WORK a boutique San Francisco production company, Table for One was shot over four full days with funding coming from both personal savings and Kickstarter. If you’re interested in the creative process, be sure to check out this behind the scenes featurette.

The same team behind Table for One has already finished its second short entitled We Were Awesome, which is about childhood friends who reconnect in their hometown over Thanksgiving weekend. Look for it at festivals in the coming year.
Vimeo Film Website
LIKE TWEET