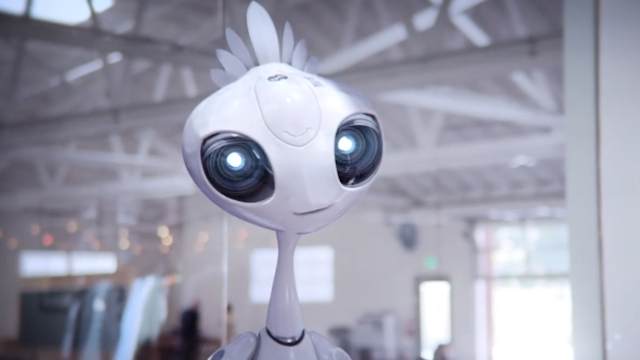 If we’ve seen a trend as of late, it’s first time filmmakers making an industry splash with short sci-fi special effects films. But, what about the opposite path? The short filmmaker who has already made his visually stunning feature, but retreats back to the world of shorts for a chance to experiment on a smaller scale? After all, the internet is still very much an open medium—a place where creativity is not stymied in favor of focus groups and four quadrant appeal. With Gumdrop, a new short produced for the WIGS YouTube channel, it seems that director Kerry Conran is seizing such an opportunity. If Conran’s name sounds familiar, that’s because he was the brains behind the 2004 feature, Sky Captain and the World of Tomorrow, a visually inventive dieselpunk action film that was spawned from Conran’s very own short film.  Ultimately, though, Sky Captain was a box office disappointment.

Having played a role behind the scenes on a variety of projects since 2004, Conran hasn’t exactly been resting on his laurels. However, Gumdrop has him returning officially to the director’s chair (along with co-director Steven Lawes).  The film centers around the titular character, Gumdrop, just your average young actress with big hopes and dreams who wants to make it in Hollywood. The twist? She’s a robot. And, I’m not talking about some sort of replicant robot who looks more or less like a human a la Blade Runner. No, Gumdrop is very much a rolling mechnication of shiny synthetic parts and blinking lights.  That’s what makes the film so intriguing.

Gumdrop is about a “real” character. She’s a CG character, yes, but she’s undoubtedly very well rendered (pun intended). We see Gumdrop’s backstory through clips of her past all while she auditions for the part in a movie.  Curiously, throughout this process, it’s never once brought up that Gumdrop is, in fact, non-human.  Her visual appearance aside, she is the most non-robotic robot that I’ve ever seen realized on screen.  Her expressions, her naivete, her nervous laughter and chit chat—all of it is the very essence of a human.  This illusion is strengthened by an unusually strong computer generated performance, something that’s quite rare in all of film, not just shorts. The voice acting is truly superb; with each line iteration Gumdrop becomes more and more relatable, with nary a mechanized bleep, bloop, or trace of voice modulation to be heard. For all the hoopla Andy Serkis got last year for being a human pretending to be an ape, I find Gumdrop’s rendering of a robot actress to be especially fascinating. She’s an actress in two senses of the word—that of a robot acting as a human being and in the traditional sense of  a young actress who just wants the starring role.

Major kudos to Conran and the team at WIGS for experimenting on a piece such as this. If there is a criticism, I wish Gumdrop felt a little less like—well—an experimentation.  The movie stirs up all sorts of ideas, from the role of classicism vs. technical modernity (Gumdrop’s favorite films are Black and White Buster Keaton flicks) to an inside look at the Hollywood machine, yet it never really expounds on any of them. You could chalk this up to subtlety, but by its very nature, the film’s premise—a robot on a casting couch—is inherently not subtle.  To me, it feels more like a bubbling of ideas that lacks a complete narrative follow through—it’s missing a certain something that would move the film beyond its basic “whaf-if-scenario.”  That’s not to say Gumdrop isn’t engaging—it is. Rather, it’s more a reflection on me as a viewer. I wanted more weighty gravitas to go with such an original characterization.  But, really, what else should I have expected from a film set inside the casting rooms of Los Angeles?

WIGS is quietly bringing a stellar arsenal of short, original narrative content to it’s professional YouTube label, most of which is centered on strong female centric stories (with some impressive star power to boot).  If Gumdrop is any indication, the channel is willing to take dramatic content to exciting new places.  At the very least, it gives visual directors such as Kerry Conran a chance to create things outside the studio system. And, that quite frankly, is a very good thing.