Aaron sings in choir, watches soap operas and sleeps with the nightlight on. Can hypnosis solve the mystery of his missing friend?
READ REVIEW
Next Previous 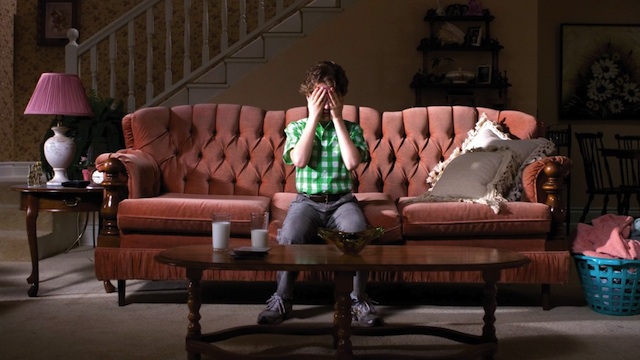 Well this is a treat. Jamie Travis is one of the most striking and original filmmakers to grace the short form in recent memory. And in preparation for the theatrical release of his debut Sundance feature For a Good Time, Call… we have been gifted his entire shorts catalog on Vimeo. James McNally recently interviewed Travis for us in a very insightful piece, but here I’d like to lead you into a more in-depth appraisal of his work.

Travis’ films on Vimeo are a sizable endowment, at the heart of which lie two trilogies, The Saddest Children in the World and The Patterns Trilogy. While long, watching them is an undertaking worth your time. It is the nature of the short film game that Travis is an unfamiliar name to many, but trust me that his reputation within the world of festival short film is large. I can’t think of any contemporary short filmmaker whose DVD collection was the subject of a glowing in-depth review from the New York Times, let alone one who had yet to make a feature-film debut.

Travis’ work possesses strong traits, making his films instantly recognizable. On the festival circuit they greatly stood out in the way they contrasted with the output of his short filmmaking peers. Surrounded in programs by shaky cam verité auteurs, Travis entices via exquisite formalism. Tasteful styling defines his film’s production design, and it does not idly stand by—set and prop design are in fact elevated, interacting with the characters like an additional actor. His restrained photographic techniques, long takes and limited movement are likewise at odds in an era of kinetic editing and of digital manipulation.

Where to begin? Travis’ formalist mastery of retro kitschy production design is one of his key signatures, so if you’re looking for Travis at his paisley and plaid best, then The Saddest Boy in the World, the second “Saddest Children” film is the place to start. However, he is also known for subtly surreal psychological portraits. Immaculate pacing and rhythm, alongside the production design eye-candy, carry the viewer through sparsely plotted scenarios imbued with sometimes suffocating paranoid and sexual tones. The Patterns Trilogy accomplished this aspect of his work most boldly.

But, if this is indeed your introduction to Travis, I will suggest you start the way I did. The Armoire is his latest and perhaps last short work, a synthesis of the two impulses defined above. It is an ambitious, yet very personal short, and I remember it transfixing me in the audience of SiFF 2009, when it won best in show.

The Armoire is the completion of the “Saddest Children in the World Trilogy” and follows Aaron, a mild mannered choir student, whose best friend Tony goes missing after a game of hide and seek. While the community is in uproar over the mystery, the film is resolutely interior to Aaron’s experience. Is there more he’s not telling? And will hypnosis unveil these secrets?

Melodramatic with a comedic streak, the film is a psychological portrait of Aaron, peeling back the complexity of his turmoil underneath an exaggeratedly idyllic surface. The angelic looking boy, played with disarming reserve by William Cuddy, is literally a choir boy! These characteristics lead many to compare Travis to Douglas Sirk – indeed, Sirk-esque themes of being trapped within a disapproving society have proven to be powerful with gay filmmakers such as Travis, notably Todd Haynes with his homage Far From Heaven. Travis mines this territory by exploring the sexual gamesmanship of Tony and Aaron through explicit and shocking symbolism. Surreally, Tony’s specter surfaces throughout the film, goading Aaron, taunting him, in scenes such as the one where Tony’s disembodied arms sharpen a pencil in Aaron’s lap during class.

In an excellent piece about the film written at the time of the film’s Toronto International Film Fest debut, Jon Davies got the filmmaker to open up a bit about the inspiration for Tony and Aaron’s relationship. Travis explains that his own sexual awakening occurred at a young age, in a relationship that was very surreptitious. “It’s all unspoken and symbolic, and that’s how it was for me when I had my first sexual partner at a very young age. It was an almost sadomasochistic emotional relationship, everything was unspoken and happened because of a game. We never just said, ‘Wanna do this?’ It was always, ‘Wanna play this game, that gets us to this other game that then starts this other game… and then finally we can be naked in the closet together.” This is a very precise description of Tony and Aaron’s relationship, where truth and dare and hide and seek, allow Tony to subtly dominate Aaron. After all, it is Tony who always gets the top bunk.

This fog of sexual confusion untangling in Aaron’s mind is the true plot of the film. While the reveal of Tony’s fate is dramatic, it is exposed with nearly 8 minutes left in the film. A lesser filmmaker, with inexact intentions, might save this for the climax, but for Travis it is merely a turning point, and is emblematic of his confident approach. The ability to guide the viewer through a long short is an impressive accomplishment, and his trademark style definitely helps. His reserved shooting techniques emphasize the film’s masterful compositions, and he often substitutes slow, precise camera movements in for editing when it comes time to reframe. This mannered approach complements the stereotypically ideal setting Travis constructs, and it also thematically reinforces the concept of control, which Aaron is struggling to secure. This care has an effect on the viewer as well; you feel that a film in such command of its presentation is one worth staying focused upon.

This care taken in crafting each image is enabled through a rather rare approach for a short film. Unlike previous works, Travis constructed the set of The Armoire on a soundstage, allowing for exacting control in shot construction. Details can be found in MarBelle’s excellent podcast with Travis about the film, but notably the long shots that open the film, and direct framing of Aaron and the titular armoire, would have been impossible in the confines of a normal home.

Travis mentions that audiences are often confused by The Armoire. It strikes a very weird blend of tones: drama, comedy, even psychological horror—and of course Tony’s fate is quite absurd. The director, for what it’s worth, finds the film to be much more comedic than most give it credit for, and despite the macabre twist, he finds the film to be an uplifting end note to the “Saddest Children” trilogy, as Aaron seeks to take control of his fear and confusion in the process of cementing his identity. I’d argue that regardless of where the film goes in terms of plot or thematic development, it is a massive accomplishment in terms of style and skill, and well worth your time. To see a short with its elements constructed with such care and whose rhythms sweep you up so easily, is a special treat indeed. Shorts are usually celebrated for the ideas behind them, their concepts, plots, and twists, but not their execution. While The Armoire is strong in those categories as well, it is rare for the actual process of filmmaking to stun you in a way such as The Armoire. It is a fantastic short, I hope you enjoy!