A flock of roosting crows, black as night themselves, are threatened by the advancing shadows at dusk. They need light for protection so with the help of the Raven Chief they take a piece of the sun and use it to save themselves from the darkness.
READ REVIEW
Next Previous 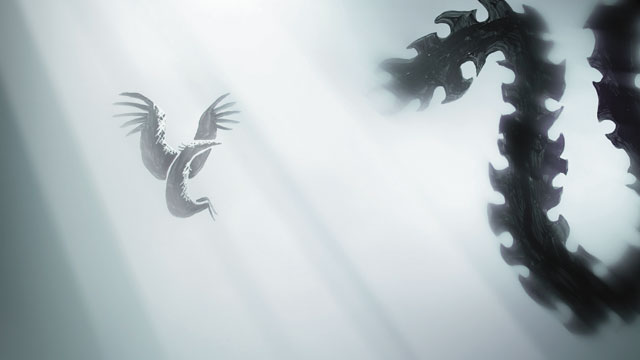 Created back in 2006 with the help of funding from BBC Scotland and the National Lottery, Crow Moon is a hand-drawn animation from Scottish director Selina Wagner that touches on the age-old notions of good vs evil, light vs dark.

With crows usually symbolising war, death, bad luck and even stupidity, to various cultures throughout the world, it’s unusual to see this often abhorred creature featuring as the protagonist in Wagner’s short. Yet with the mythical and magical feel the director manages to inject throughout her film, this usual harbinger of doom suddenly seems perfectly cast as the hunted hero of Crow Moon.

Developed over several years and brought to life in the director’s spare room throughout a six-month period of first hand-drawing on paper and then painting on cel, Wagner managed to add the vital aspect of light to Crow Moon through strategically placed illumination and the ingenious use of tin-foil.

Dialogue free and set to a swelling soundtrack of drum beats and sound effects, Wagner’s film franticly builds  throughout its near 5-minute duration and you’ll quickly find yourself enveloped in the tale of this feathered tribes frenzied battle for survival. With a timeless narrative at its core and a poetic atmosphere flowing through its veins, Crow Moon is a beautifully realised animation for all to enjoy.