Amar is 14 and top of his class. He's also his family's main breadwinner, working two jobs six and a half days a week. An observational documentary that follows Amar through his daily life.
READ REVIEW
Next Previous 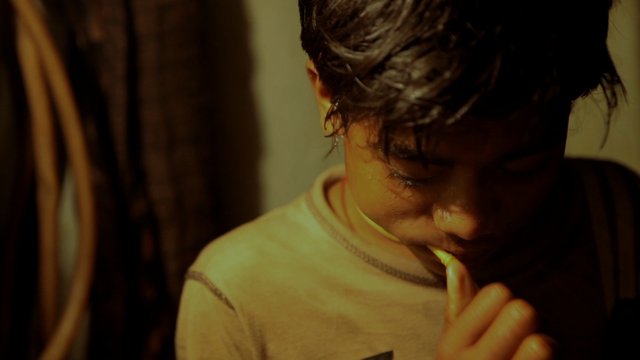 The current era of documentary is certainly a pessimistic one. Humanity is destroying the world! What you eat is killing you! The system is broken! We relish in the dissection of our own destruction, shocked that people could be so corrupt, that our future could look so bleak.

Then, comes a film like Amar (all great achievements require time). Lyrical and deliberately paced, Amar follows a 14 year-old Indian boy at the top of his class who would someday like to be a professional cricketer. He also happens to be his family’s main breadwinner, working two jobs six and half days a week. But, this film isn’t an analysis of Amar’s misery or  an expose on his suffering. No, it’s instead a quiet celebration of the human spirit–of a boy whose tenacity and quiet resolve carry him through every day. The system may be broken, but Amar’s spirit certainly isn’t.

Focusing on a single day in Amar’s life, the film is what director Andrew Hinton calls an “observational documentary.” The focus is simply on Amar’s daily routine. Dialogue is eschewed, as are talking-head interviews, know-it-all voiceovers, or annoying gimmicks. The film even does without music. Essentially, this could be considered documentary in its purest form—we watch life, with all its tiny idiosyncrasies, play out.  Amar wakes up. He dresses and heads off to his first early morning job. When he takes a moment from his daily routine and reads a newspaper, it’s as if we are witnessing a silent moment of triumph, presented with no artificial fanfare. Special kudos should be given to the film’s sound design. Without the crutch of music, the film takes on a unique soundtrack of ambient noise. Each scene is propelled by the chorus of Amar’s surroundings. The cinematography is equally adept.  Shots are well-composed, but never call attention to themselves or are hindered by unnecessary shaky-cam.

In the end, the film is not attempting to make some grand, profound statement. It’s not requesting that we view Amar has some sort of hero or metaphorical beacon of light. It just asks that we pay attention—give up nine minutes of our lives  to halt our lamentations of the world and remember, if just for a moment, that there truly is beauty left.