Just another day at work in this poignant animation that played Ottawa, Annecy, and Stuttgart.
READ REVIEW
Next Previous 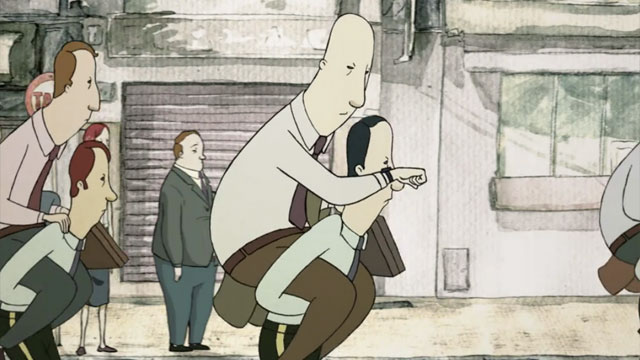 A man wakes up and starts his day as usual. Only this isn’t our usual world. Scattered throughout his house, the street, and elsewhere we find people performing menial tasks as if they’re living furniture. People pose as coat racks, hold bathroom mirrors, and give piggy-back rides down the streets. Finally, the man makes his way to the top floor suite of an office building where he… well, I shouldn’t spoil it for you.

I admit I scratched my head for a bit after watching The Employment for the first time. Certainly the film resonates especially strong in the current economic climate. With 9% unemployment and many more settling for menial jobs to pay the bills it’s easy to feel like nothing more than a coat rack at times. The film could even serve as a PSA for the Occupy movement—99% of us serving as doormats for the top 1%.

But there is also something else—something about technology and what it means to be human. We are creators, and we create new things to make our lives easier. Every small thing—a chair, a coat rack, a doormat—we invented to make our lives a tiny bit more convenient. Why? So we could focus on the more important things like creating new conveniences.

The film reminds us of how for we’ve come. And maybe even asks the question, “Where are we going?” How much more convenient can we make our lives? Think of all the effort put into creating and selling minor conveniences. Do we really need another way to slice a potato?

The film had me asking myself a rather big question—What is progress? Perhaps we need to enrich our lives with meaning rather than conveniences. A sentiment underscored by the character after the credit roll.

The Employment played all the major animation festivals like Annecy, Ottawa, Stuttgart and too many more to list in a single post. In fact, the film has done so well, it’s spent the past three years ricocheting around the festival circuit like a pinball before finally finding a home online.

I’m sympathetic to the director Santiago because, like me, he studied visual communication design before going into film. His quiet compositions and pacing show a real talent for storytelling. He currently works as an independent illustrator and animator out of his studio in Argentina. You can follow his work here.