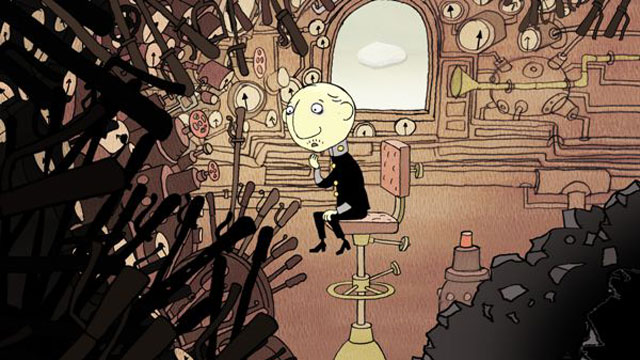 It was big news when Runaway dropped online in 2010. I had been hearing the hype for a long time, getting emails from publicists, and reading adoring praise of the artist. He was a man of genius, and this was his biggest thing yet. What? No, not Kanye. We looked at his Runaway already! I’m talking about Cordell Barker.

Barker is an acclaimed animator out of Canada, and like many acclaimed animators, new work from him is a rare and eagerly awaited occurrence. Runaway is just his third short film, after the Oscar-nominated The Cat Came Back in 1988 and the Oscar-nominated Strange Invaders 2001. Despite being the star of the National Film Board Canada’s 2009 festival and awards promo push, Runaway could not complete the Oscar Trifecta, though it did play in theaters last year as part of the animated shorts program. Nonetheless, I agree with the hype. I find it Barker’s best work yet.

The story revolves around a train as it begins to hurtle out of control. There are two passenger cabins, first-class and coach, with matching cultures in each. Barker is a true cartoonist, and the caricatures of each cabin are broad and funny. As the situation gets more dire a class-conflict breaks out, and according to press tagline while “naturally there are victims, in the end everyone is equal.”

The film is a natural showcase for Barker’s classic sensibilities: the speed of the train, flying through the air, wrapping itself around mountains, is a delight, and allows for comically exaggerated reactions by the passengers. Even better is the opportunity Barker has for some of his trademark dark humor, coming, in this case, in the form of biting satire. It is easy, and encouraged to view the film as an extended allegory: the train representative of any shared framework, a country or the economy. The people in charge of looking after it, (the train employees) are alternately asleep, incompetent or moronic, and the class conflict between the cabins seems especially relevant in a period, post-financial crisis, that briefly revived the ghost of Marx around the world. And of course, the crash. While not terribly nuanced, it is impressively succinct; a welcome political statement in a form that rarely makes them.