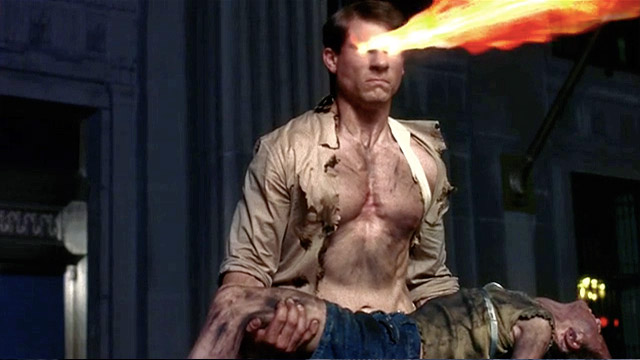 You shouldn’t think of Burden as a short film. To do so will only lead to disappointment of one kind or another. No, Burden should be regarded as a seven minute clip (plus a couple minutes of credits) taken from the newest, big-budget, popcorn-selling, comic-inspired, extravaganza blockbuster. It screams that it should be that, and has enough in it to make me scream along.

The feature would be the epic struggle between an alien superman and both a mysterious invading armada and the rules of his own people. For the short film/clip, well… things are still surprisingly epic. Calik was sent to Earth forty odd years ago, apparently to observe, but definitely not to interfere. Now, as he dwells on the value of humanity, he is informed that Earth is doomed and he must depart before a maniacal race of armored baddies have their way with the planet. Can he leave the world to its fate, or will he pit his superpowers against an army where each member is nearly his equal?

OK, we all know what Calik’s going to do, though if he did just runaway, it would fit better into seven minutes. Of course he’s going to fight, with supersonic speed and blazing heat vision. Story-wise, there aren’t any surprises, except for how suddenly Burden ends. What we have is a re-imagining of Superman (even his name echoes the being in the gaudy latex suit) the way it should be done: a bit of noir-flavor, a good deal of longing, an impossible task, and some good old fashioned rule breaking. This is the powerful alien hero I want to see.

The plot follows the expected path, but the production is another matter. Short films shouldn’t appear this spectacular. This really looks like a clip straight out of a multi-million dollar flick. And why not, when the director arranged for the city of Chicago to shut down four blocks of prime downtown real estate for filming? I’ve never heard of a major city closing off busy streets for a short film. The fabulous old Chicago architecture gives the film both an anchor to reality and a strong doss of yesteryear that do wonders to set the mood. The fantastic FX work does the rest, giving us a sky full of space ships, explosions, and those beams of energy that are the hallmark of a great Saturday afternoon at the movies. Plus, the evil invaders have seriously cool space suits (or are they robots?).

The obvious plan is to expand Burden into a feature. Michael David Lynch is in that deadly slow process of developing it (and hoping for money). Until then, it is making the rounds of the festival circuit, and normally staying off of the internet. But it is appearing online for a limited time while it is playing on Italian TV. So, watch Burden while you can on Vimeo.