A still photographer steps behind the lens to tell this beautifully-composed story of a man's quest to cure to his lonely existence.
READ REVIEW
Next Previous 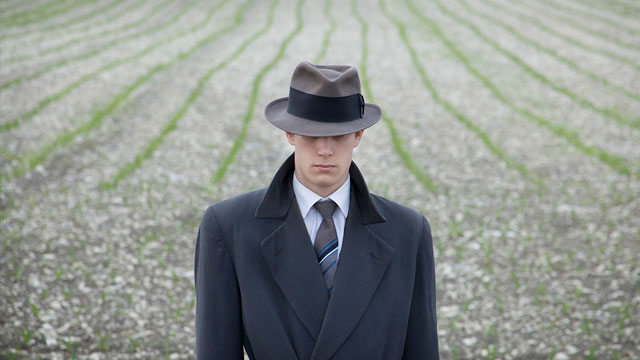 Most readers of this blog share a strong interest in filmmaking and are likely aware of the vast number of films out there—most so unworthy that one might prefer time alone watching Stanley Kubrick’s opera omnia over and over again. But those who dare to leave shelter and face the quest for beauty are sometimes rewarded with gems like Solitude.

This short film—Robin Risser’s thesis project at the ESAG-Penninghen—offers us “a long journey in solitude searching for hope”. Shot in one week in the Charente region of France, the short film conveys a strong sense of astonishment thanks to insightful planning, effective color correction, and the filmmaker’s masterful sense of composition. With very little happening on screen, every scene plays like a breathtaking photograph. In fact, I found myself hoping nothing would happen that might draw my mind away from the perfect harmony I felt while watching.

Our hero searches for inspiration in books and technology before extending his quest to the outside world with an umbrella to protect himself from the inclement weather—perhaps from the world itself, one might think. On his next journey, might it be luck or the voice of Billie Holiday or maybe the lack of his umbrella, he finds what he is looking for: a flower to make his solemn days worth living.

In trying to make sense of Solitude, my advice is to follow the path of our man and after the first failed attempt, just let the stream of images flow over your corneas. But, as always, I leave any further considerations up to you.

Lastly, I want to point you to a series of inspirational photographs the director took as a test six months before the actual shooting. Based on a slightly different idea than the final short (being shot in a different season of the year), the images are inspired (among other things) by the work of Andrew Wyeth and feature the protagonist with his face covered with bandages. You’ll find this test photos on Robin’s website—under the link “Solitude”, click on “Alpha”.