A rapidly violent music video set in a cubic construction of the Mexican crime world.
READ REVIEW
Next Previous 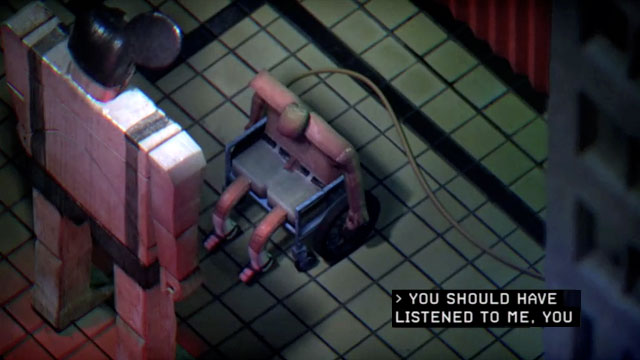 One can either be put off or spurred on by an NC-17 rating warning. In the music video, A Volta, the latter pays off. The handmade titles and warnings are more catchy first-liners than descriptions of what’s to come. Sure there’s random violence, sexuality, and adult subtitles, but what else could be expected from a film set in the Mexican drug world. Plus, it all seems so much more digestible when it’s depicted in such a crude, video game-like format. With a form so abstracted the filmmakers, Logan, have given themselves the license to push the story to extremes.

Logan, a motion design studio famous for their slick commercial work for big companies like Apple, Nike, Sony, and others, are the main faces behind A Volta. Inspiration came from the artwork of The Date Farmers—an LA-based duo who describe their work as “Mexican-American heritage rooted in California pop culture”. Their work has been translated by Logan into a dark, grungy world that could be the offspring of Sim City and Grand Theft Auto. The erratic camera work keeps a frantic pace that seems most revealing when less is shown.

It is a music video but one where the featured song plays as background music to a narrative with characters and dialogue. The song is by NASA (North American South America) from their first album, The Spirit of Apollo released earlier this year. All the songs on the album have corresponding videos made by selected pairings of artists and directors. Though I haven’t found any others yet.

If you’re interested in learning more about A Volta, BoingBoing has a nice Q&A with the director, Alexei Tylevich of Logan.