It’s nearing the end of July and despite many areas re-opening, and normalcy starting to reassert itself, shelter-in-place is still a daily reality here in much of the United States. It was our fondest hope when we kicked off #ShelterShorts in April that the need for an initiative to highlight the best in quarantine-induced film creativity would evaporate by mid-summer. But, with productions big and small still on hold, Shelter Shorts is still on-going. While this state of affairs is both frustrating and tragic (for all sorts of reasons we don’t need to get into), we have, and continue to be, surprised and impressed by the work you are submitting every day. Today we want to highlight a pair of new pieces that will put a smile on your face, while also making an announcement about the future of the project.

The above film is a new Shelter Short from Crystal Moselle. If Crystal isn’t a creator who is on your radar, then you need to rectify that pronto. The gifted storyteller initially came to widespread attention for her feature documentary, The Wolfpack, which was a breakout hit in 2015. Her subsequent narrative short, That One Day, was an S/W Awards recipient, and the project has had a unique afterlife—Crystal has continued to work with the real-life skate crew at the center of the film, transposing them to different formats: first a feature film (her 2018 Sundance narrative, Skate Kitchen, which was picked up by Magnolia Pictures) and now to television, as Moselle recently wrapped up the acclaimed first season of Betty on HBO (which is undeniably excellent btw).

This short, A Cat’s Quarantine: Told in Two Parts, returns felines to their rightful place at the center of the internet-universe. Starring Crystal’s foster cat, Isobel, the film is a quick 3min character sketch of Isobel coping with the quarantine blues. In a development that I’m envious of, Isobel uses her confinement for a bit of self-improvement, taking an interest in dance. Look out for a cameo from fellow S/W Award winner Naima Ramos-Chapman, as Isobel uses the internet to learn how to unleash the grace within her in new and surprising ways.

Our partners in #ShelterShorts, filmmakers Lance Oppenheim and Max McGillivray, reached out to Crystal about participating and she, despite being deep in the runup to Betty’s airing, enthusiastically agreed. What we didn’t know was that this invitation would be a 2-for-1—not only did Crystal produce a lovely and charming short, her father, Charles, decided to get in on the action too! One of the (only) great things about this period in time is how people, from all backgrounds, are using the time to scratch their creative itch, so we were excited to see what Charles came up with. And folks…it is wild.

UHC4A- DUH, is a truly outrageous piece of advocacy for universal healthcare in America. Heaven, hell, wormholes, zombies and a lipsyncing dead president all play a part. The imagery is fast and unapologetically cheesy, wrapped into an original song that transforms The Beatle’s hit “All You Need is Love” into a righteous anthem for universal healthcare. Charles explains his motivations in the quote below. Check it out! 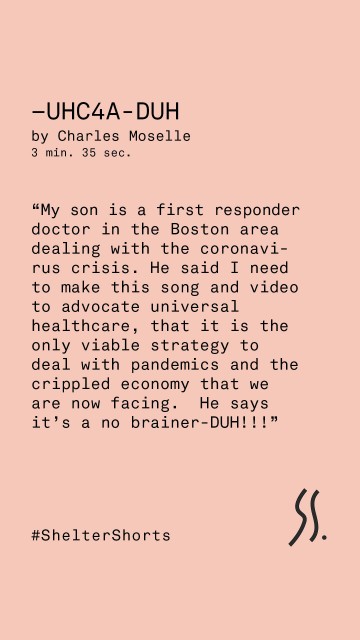 We hope you enjoy these two pieces, and you can watch plenty of other Shelter Shorts at the project’s official website. Now for that announcement however…

As we approach our fundraising goal, we want to make everyone aware that Submissions for the initiative will close one week from today, on July 31st, after which we’ll do another “Best-of” wrap-up of our favorite films from this initial batch.

We haven’t closed the door on re-opening the project should circumstances demand it, but, for now, we’re going to rest up. Thanks so much to the hundreds of filmmakers who have submitted and have been featured by the project, it has been an immense pleasure to view and curate your work! If you’ve participated or simply enjoyed Shelter Shorts, please consider donating to World Central Kitchen, and help us reach our fundraising goal before we hit this hiatus.

Cheers, and stay safe everyone!

To watch more #ShelterShorts or to submit, visit the project’s website.