We’re big supporters of experimentation in short film and for S/W favourite Ross Hogg, pushing boundaries always appears to be at the forefront of his work. Whether working on solo projects exploring the monotony of routine or collaborating with fellow S/W alum Duncan Cowles (Taking Stock), Hogg injects his work with an innovative approach that means you never quite know what to expect from him next.

Attendees of the 2019 edition of the Encounters Film Festival will get a chance to see the variation in his work at this year’s event, as he presents his latest project 4:3 in the Animation and VR programmes, whilst also screening his latest collaboration with Cowles, Just Agree Then, as part of the Comedy selection.

Twelve animated projections combine to develop a rhythmic dialogue exploring the intrinsic relationship between sound and image using 16mm film, paint and a projector. Responding to a hand-drawn soundtrack, each projection is individually created by painting and scratching directly on 16mm film stock.

Available as a short film, immersive installation, and a 360˚ film, Hogg admits 4:3 began when he decided he wanted to experiment with taking his work away from the usual cinema setting and into the gallery.

“The initial idea was to try to make this project as physical as possible”, the filmmaker says. “I felt that having the film exhibited in a physical space, allowing an audience to experience it on their own terms, would enable this to happen, making the experience more immediate or tangible than how it could be experienced in a cinema. I also liked the idea that the film would not be restricted to being shown on a single surface. It could potentially be more immersive in a physical exhibition setting by projecting it on different walls or having multiple screens which wrap round the viewer, almost allowing them to step inside the film”.

While creating something that could be exhibited in a gallery setting was the initial inspiration behind 4:3, the director also recognised that editing the project into a more traditional short film would offer a more “designed viewing experience”. The 360˚ version however, was a late addition. “It wasn’t something I had really ever considered making”, Hogg reveals. “It was during editing process that I realised if I made a 360˚ version I could virtually place the viewer inside the work, creating an alternative way of immersing the viewer in the film, unbound by physical restraints”. 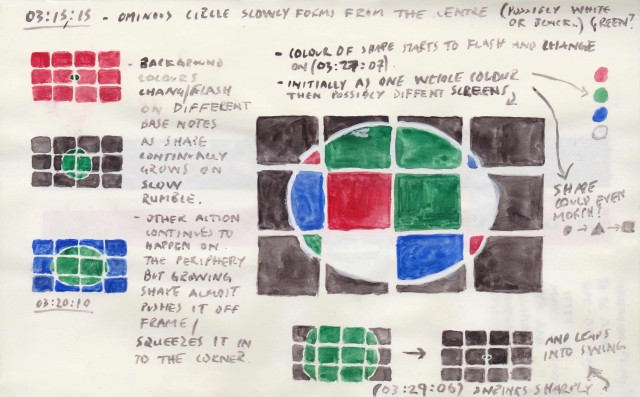 Sketchbook page from the preproduction of ‘4:3’

You’d assume that creating three different versions of the same project, would have meant a lot of extra complication and planning throughout the production, but Hogg concedes this wasn’t really the case. “As each of the films are made individually, it meant it was always going to be adaptable and able to be broken up and reassembled in whatever way I needed”, he says when discussing the process behind making 4:3. “I had planned to do more post-production on the short film version (like having camera moves to dart between projections and really direct what the viewer sees), but during the editing process it felt like a bit of a waste to focus on one or two projections when there are 12 doing different things simultaneously, and that has an impact in itself. I decided in the end to go with some subtle camera moves to bookend the short film version which I think ended up more effective”.

With the installation exhibited in Perth, Scotland for a couple of months earlier in 2019 and the short film and 360˚ version currently touring festivals, Hogg is now getting an unusual first-hand experience of the benefits of the different presentation methods. “People have reacted more strongly to the 360˚ version of the film”, he tells me when we discuss audience reactions, “the scale of it feels pretty overwhelming, and maybe the lack of any other context allows you to be completely immersed in the film. It’s also designed to wrap right round you with the camera hovering in the centre so it can feel a bit like you’re incased in your own personal club night”. 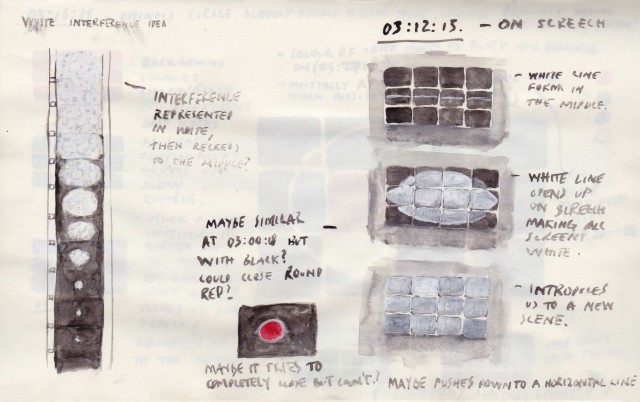 Sketchbook page from the preproduction of ‘4:3’

The short film version of 4:3 plays as part of the Animation 1: WhatThe? screening at Encounters on Wednesday 25th September and you can catch the 360˚ version, as part of the VR selection, throughout the festival.

Alongside Ross, a number of other S/W alums have films screening at Encounters:

There are also a number of films (mainly animations from some of Europe’s biggest schools) playing the festival that are already online: