Last time we spoke to filmmaker Karen Maine, her feature adaptation of short film Yes, God, Yes had premiered at the 2019 edition of SXSW and she admitted that the next goal in her filmmaking career was to get the film “picked up for distribution”. A lot has happened since I conducted that interview over a year ago, but we’re happy to confirm the film was indeed picked up for distribution and is finally available in select drive-ins and virtual cinemas and you can watch at home through various VOD platforms (US only at the moment – dates for Europe TBC).

The film is one of our most recent short to feature success stories on Short of the Week and while Maine was kind enough to break down the process of bringing this longer version of her story to screen in our interview, fans will be glad they finally get to watch it, instead of just reading about it. Expanding on the story introduced in the short, Maine describes the 78-min film as being about a “16-year-old protagonist who sort of stumbles into masturbating for the first time”, adding that she “feels very conflicted because she loves it but she knows it’s a sin because of her Catholic upbringing”. 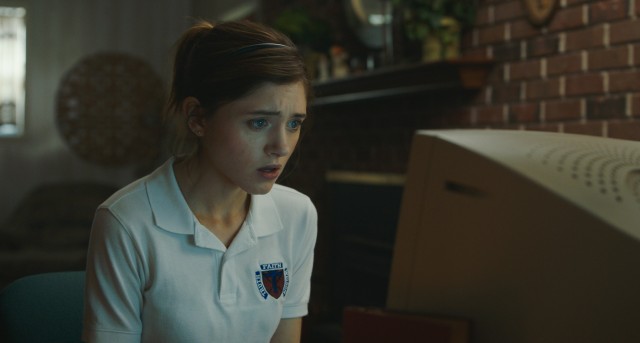 Speaking to Maine, on the US release of her film, she described the journey of bringing the feature to a larger audiences as “great, but long”, although some of that wait can be attributed to the fragile state the world currently finds itself it. “We found wonderful partners to distribute here in the US” the filmmaker explains, “and Highland found us other distributors across the globe, but it’s definitely taken some time. My advice is, if you believe in your project and your vision — never give up! Someone else will too. But the truth is a lot of people will tell you no before you hear a yes — and that happens over and over again at each step of the process of getting a film made. Be persistent!”

“The most important thing is that people can see the film”

Admitting to feeling a “little disappointment” at the film not getting a more traditional release and hitting the big screen, as she believes Yes, God, Yes “is a fun one to watch with a group”, Maine is nonetheless excited the film is finally available to watch. “The most important thing is that people can see the film”, the director explains. “That’s all that matters at the end of the day, really. And, ultimately, I would not want to risk anyone getting sick or getting others sick to see it. FaceTime your friends and watch it together (from your separate homes)!”

If you’re in the US, you can find out how you can watch the film here. If you’re in the UK (August 17th), or other parts of Europe, dates for its release will come later and for now you’ll have to console yourself with the trailer above, or read some of the positive reviews from the likes of The New Yorker and rogerebert.com