That morning, as she gets ready for her dance audition, Alex is outraged when her mother forces her once again to babysit her disabled sister.
READ REVIEW
Next Previous

Today is an important day for Alex, she has a dance audition she’s been preparing hard for and it’s clear early on in Florence Lafond’s Meute (Herd) that this is the most important thing in her life right now. So when her plans get derailed, as her mother is called into work early, once again the responsibility of taking care of her older sister Steph, who has Down syndrome, falls on her. Painting a layered and complex portrait of a single-parent family struggling to balance the demands of life, Meute invites its audience to experience the events of one stressful afternoon and its emotional toll on Alex, Steph and their mother.

It’s in her experience as a specialized instructor for people with intellectual disabilities that Lafond drew her inspiration. In this role, as a teenager, she was responsible for a group of adults, older than her and the experience obviously made an impact on the filmmaker. “I have often felt like I didn’t have the maturity to deal with the amount of responsibilities that were given to me”, she explains.

Exploring these feelings through Alex’s experiences in her short, we’re presented with a dilemma the writer/director is obviously familiar with – trying to balance the desires and aspirations of a teenager, with the responsibility of being a caregiver. In the film, Lafond takes her main character to breaking point, a place where she feels forced to make a decision, even if she knows that she might not be doing what is considered right. “I wanted to explore how far can you go before your emotions surpass your reason”, she tells us. 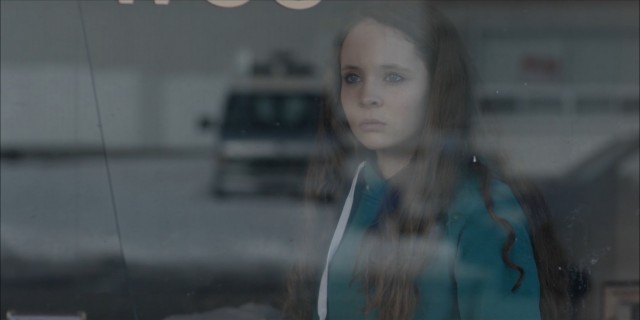 Amélie Caron as Alex – the emotional core of Lafond’s short

While the film focuses on Alex, as she grapples with the reality of her life as the younger sister of someone with Down syndrome, and with a mother struggling to find a balance between her work and her family, Lafond ensures she spends time capturing the family dynamic in an authentic and empathetic manner. The exposition is so heartwarming, as we see all three of them having fun together, but it also works to quickly show the viewer Alex’s role with her older sister.

“I wanted to pay tribute to the families of people with special needs, and show how it’s difficult to get support”, Lafond reveals as we discuss the motivation behind her film. “I also wanted to paint a realistic portrait of people with Down syndrome, too often represented as child without personality, when they can be adults with complex feelings”.

And she does just that, in fact, throughout the short’s 12-minute duration, Lafond constructs layered personalities for all her characters, building instant connections between her on-screen family and her audience. Where the film truly lands an emotional impact though is by showing the two facets of Alex’s role in the family, showing us the part she plays in her sister’s life, the sacrifices she has to make and the effect of those responsibilities.

Though Lafond obviously spent a lot of time thinking about her characters, it’s largely in the performances in Meute that they become so emotionally engaging and compelling on screen. The mother portrayed by Martine Francke (whose performance I already praised in I’ll End Up in Jail), while not being the central character contributes to the warmth of their family unit, before perfectly capturing the complex, stressful situation she navigates daily. With that final scene – where her desperation, mixed with hints of fear and frustration, all come together in a devastating way – acting as a perfect illustration of the pressure her single-parent life is placing on her

As Steph, Geneviève Dupont-Morin brings the perfect wit to her character, navigating the ups and downs of her emotional state effortlessly and sharing such genuine chemistry with Amélie Caron, Alex. While Caron herself strikes the right chords in every scene she’s in, her character is the one who has the most conflicting emotions and she captures them all expertly. Between the weight of her responsibilities and her guilt, she really fleshes out her character and it is impossible not to empathize with her, which ultimately makes that last scene so powerful and so cathartic.

Ahead of its online premiere today, Meute made its way around the festival circuit with notable stops at Regard in 2018 and at Clermont-Ferrand in 2019, it is also part of the Spira catalogue. As this was Lafond’s directorial debut, we can’t wait to see what she achieves with her next project, we’re certain she will be another exciting filmmaking voice from Quebec, that you’ll need to keep your eyes on.