TREACHERY! Lou’s mum sold his beloved roller skates at the swap meet. A series of strange and revealing encounters begin when he inevitably goes looking for them in the buzzing crowd...
READ REVIEW
Next Previous 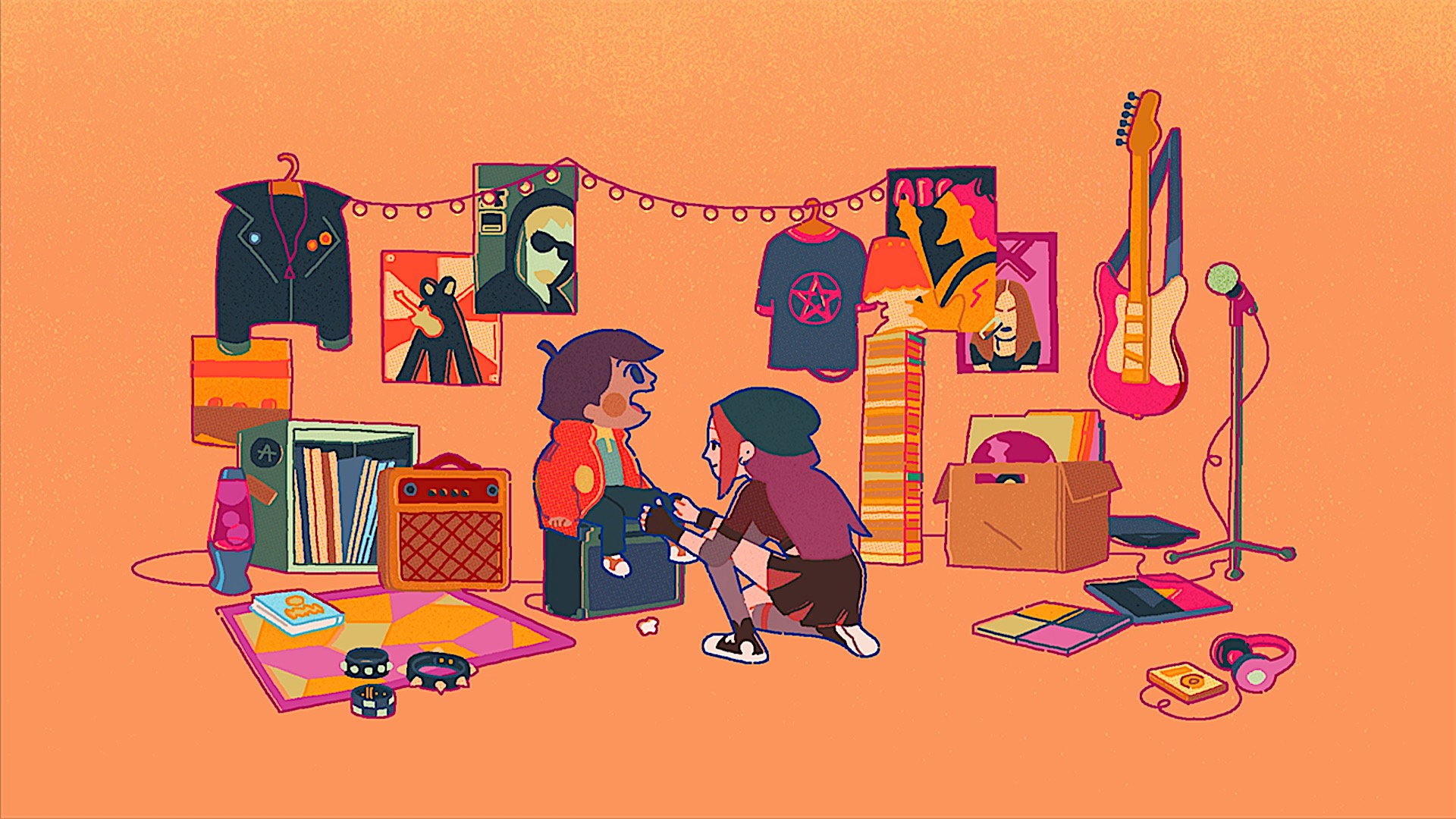 A concentrated pop of color, coming-of-age sincerity, and early 2000’s nostalgia, T’as vendu mes Rollers? is the latest release from the French animation school Gobelins, whose yearly slate of graduation films is always a highly anticipated internet event. The 3rd of 8 shorts to be released over a 2-month span, the infectious enthusiasm of this low-stakes hero’s quest, told with genuine formal panache, makes it my favorite of the school’s 2020 output and a must-watch for animation fans of all ages.

Lou is stuck at the local swap meet, his mom manning their family’s booth. When he learns she sold his awesome rollerskates (yellow, with flames, and neon green laces!) he’ll stop at nothing to get them back. This premise introduces a classic quest structure to the film, providing both adventure and myriad opportunities for Lou to interact with an appealing cast of colorful characters: the walkie-talkie wielding child salesman, an ultra-cool musician heading off to college, and, finally, an aging skateboarding legend who we can trust to impart some sage life advice. Most appealing though is Lou himself—a precocious, too-cool-for-school kid, it would be so easy for him to come across as snot-nosed and annoying, but instead, his character is imbued with the perfect mix of brashness and sensitivity. 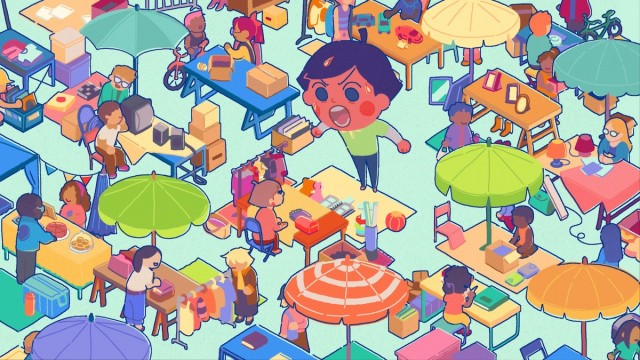 Example of the team’s use of “super deformed” character design

The story isn’t revelatory, but the execution is just soooo smooth. With strong character designs and a perfect modulation of pace and tone, the six students who make up the creative team transpose familiar quest tropes to the unique setting of the swap meet like they are decades-long pros. Despite growing up in far-flung locales (different continents even) each of the 6 artists possesses memories of working swap meet booths as kids, so the universality of the setting struck them as promising. While it does feel strange to smuggle an adventure quest into this everyday setting, the visual chaos of the market and the maze-like layout that defines it is, in retrospect, a perfect match for a story that draws inspiration from role-playing games.

The guardrails of the quest-style structure also provide ample opportunity for the team to play with the visuals. The colors and basic design will get most of the attention, but I find the sheer diversity of styles exciting. The film fluidly shifts from closeup framings to video game-style isometric views, and between standard character designs and anime-influenced “chibi” or “super deformed” looks for added expressivity. Surprisingly these stylistic shifts maintain a high degree of aesthetic uniformity which is, again, hi-level stuff! In describing their approach the team informed us, “We are following Lou’s journey through his eyes and we wanted for the graphic approach to reflect that…The fact is that we mostly used graphic codes that belong to illustration and comics rather than cinema, so that each shot is a different concept that quickly translates the emotion of the scene. All of this allows us to be closer to Lou and to feel what he feels.” 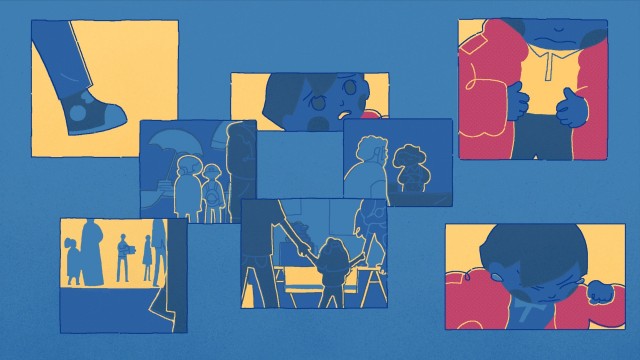 An example of the film’s extensive use of frames

But, what is most striking and fun about the visual approach is the team’s play with frames. Frames within frames are everywhere in the short, utilized for narration, synchronous storytelling across locations, and even scene transitions. The creative team obviously took tremendous glee in the storytelling potential of these devices, having Lou fight against, and even travel throughout the swap-meet world via frames!

Added all together, T’as vendu mes Rollers! is a bright and immensely appealing short that doesn’t let up for a moment, overwhelming you with charm. But discussion of how it does that should not overshadow what it does, which is produce a surprisingly insightful and emotive lesson on growing up and letting go. The central theme, as described by the creators, is concise and universal—“This story is about having the courage to let go and move on and how our lives are in a constant flux. It’s a theme that touches every one of us however old we might be.”

With diplomas in hand, the team is off to the next chapter in their young careers. A mix of freelance work and gigs at venerable studios like Cube Creative await, but these 6 artists: Jeanne Hammel, Margaux Cazal, Louis Holmes, Sandy Lachkar, Agathe Leroux, Léa Rey-Mauzaize captured lightning in a bottle with their collaboration, and it would be awesome if they could find a way to work together again. Many of them have joined a brand new director collective, Potto Collective, so we’ll hold out hope that they will be able to join forces again in the future.