A man taking care of his cybernetic pet is threatened by a group of idle troublemakers.
READ REVIEW
Next Previous 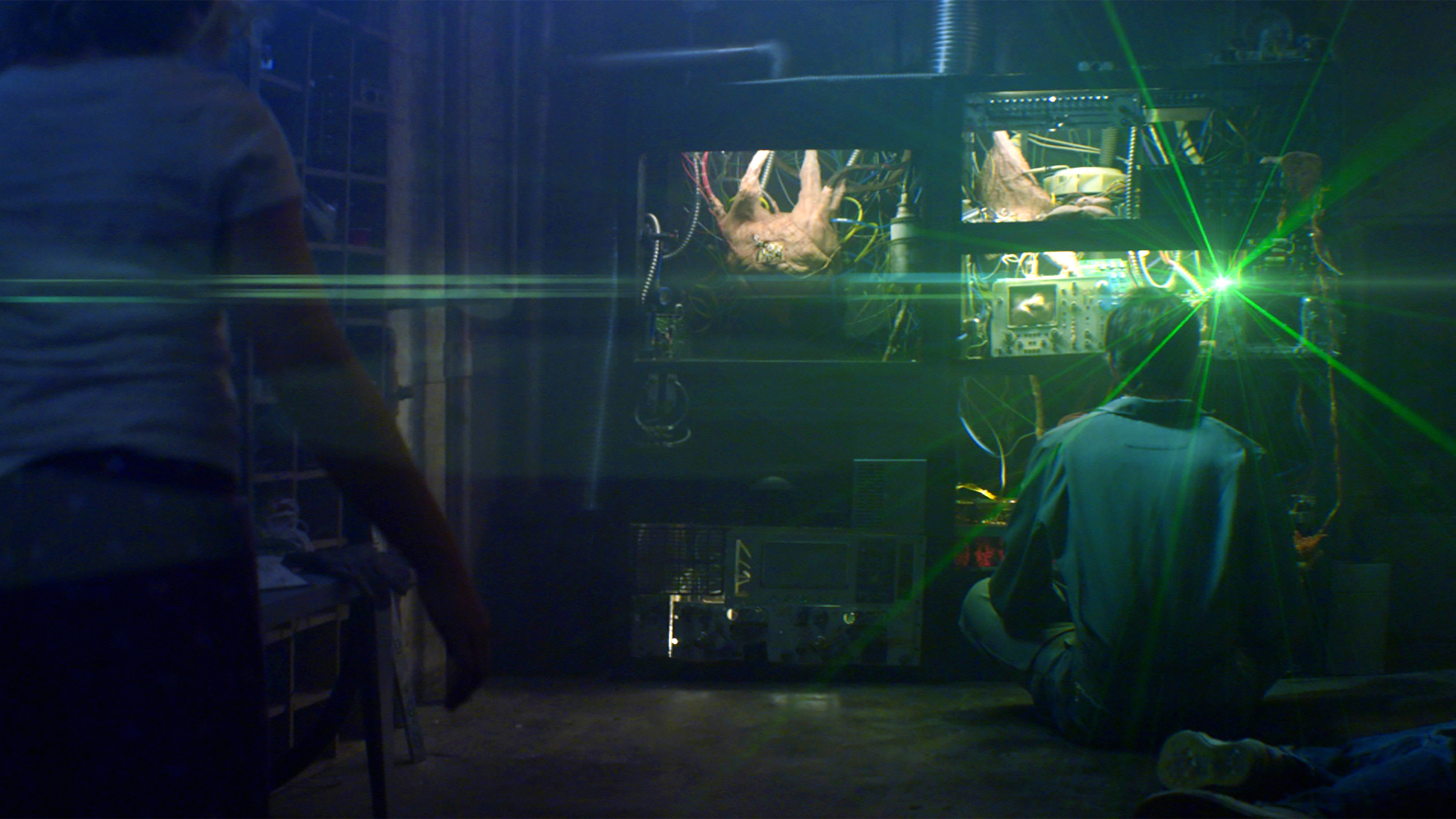 Flesh Computer is not your every day film. With a title like that, how could it be? Here at Short of the Week we feature the greatest stories of our time, but Ethan Shaftel’s Flesh Computer is altogether a different brand of great. It leaves us with so much to think about (perspective, special effects, technology, and to some extent acceptance) it is not difficult to decide where to start, but difficult to decide where to end.

The sheer amount of practical effects used in this film is wholly impressive. If anything else it’s a great case reminding us the sort of impact these physical sorts of things can really be. While the film certainly uses CG to its advantage, the entire flesh computer is physically operated by George Troester who is, Shafter tells us, “…hiding behind the whole contraption blowing fluids through pipes, flipping on the lasers, and manipulating the “mouths.”

With this in mind I presumed the greatest challenge in executing the film would come from the mechanics. But I was surprised to discover one of the greatest challenges stemmed from the cat, or should I say, cats. Shaftel states “…Nothing was more stressful than getting what we needed from the cat, which was actually a team of three identical cats. We were lucky to get a favor from a professional cat team, but the trade off was a VERY limited amount of time. The whole day was basically built around what to do in what order when the cats arrived.”

This film deals with conceptual notions perspective and by no means was this an accident by the filmmaker. Shaftel tells us he is “…interested in the concept of point of view; what it means to have a point of view, or, to put it another way, what it means to be a conscious being. In the movie we utilize point of view shots to see through someone else’s eyes; we get inside the head of everyone, from the computer, to the housefly.” Shaftel’s interest in perspective is echoed with compelling and stimulating words of David Chalmers in the background that undoubtedly cements the notion of perspective as one of the most integral parts of the film.

There is an interesting moment in the film that addresses perspective in a rather unique and interesting way. There is the scene in which the we travel around a room from a fly’s perspective. We see what he sees and how he sees it. He lands on a man’s face where stubble, which appears small to us, looks massive to the fly. The fly sits on the man’s face comfortably and out of the corner of the fly’s eyes we see the reflection of the man’s hand hammering down to swat the fly off his face. What results is the complete and utter destruction of the fly. What interests me most here is not only how Shaftel uses the fly’s perspective, but how he uses sound to enhance the perspective. We hear are shattering glass and other sounds of materials we can understand and in some ways are related to construction. This is a perfect demonstration of our inability to be able to look at other forms without projecting our own experiences onto them. Try as we might, which is better that we do than don’t, we are unable, as obvious as this is to say, to truly separate ourselves from our own point of view.

Something that’s difficult to ignore is the film’s relation to David Cronenberg’s classic film Videodrome (and to some extent The Fly) and the unforgettable “new flesh.” (Note: This is something I could go on about for an eternity so I’d like to briefly mention a great and fun book that includes a lively chapter on Videodrome is Television at the Movies: Cinematic and Critical Responses to American Broadcasting). With each generation there is a corresponding technological fear that is perceived to ultimately ruin the fabric of society. There was the radio, the movies, the television, computers, computer games, and of course the internet, each of which have had their fair share of praises and criticisms. Videodrome in some ways reflects the cultural paranoia of the infiltration and the dangers of television. But Flesh Computer does something a bit different. It goes so far as to not only recognize the fear from some of the members of their culture but also the importance of embracing and protecting it in a sense. In some ways we can argue the film’s execution is a reflection of this idea of embracing both old and new technologies in its dedication to both practical effects as well as CG.

Director Ethan Shaftel tells us “The origin of the movie is imagining having to take care of a computer as if it was a child or a pet — the responsibility you’d feel if it breathed and sweated and in some ways resembled ourselves.” While the film is much more literal in terms of the computer being actually made of flesh, it’s not too far of a stretch considering how protective we often are of our computers. Some of us dress them in cases that express specific identities, clean them, name them, in some cases refer to them as their baby. In many ways computers have become extensions of ourselves (which is another discussion entirely) but I can assure you we would do everything we reasonably could to protect them if ‘our baby’ was being threatened. The film not only addresses how we protect computers, but also how we have come to rely on them to protect us.