(NSFW) After Molly's mother passes away, she goes to visit her grieving father. She tries to enter her mother's room but finds it to be locked. Upon entering she's met with with an unusual surprise.
READ REVIEW
Next Previous 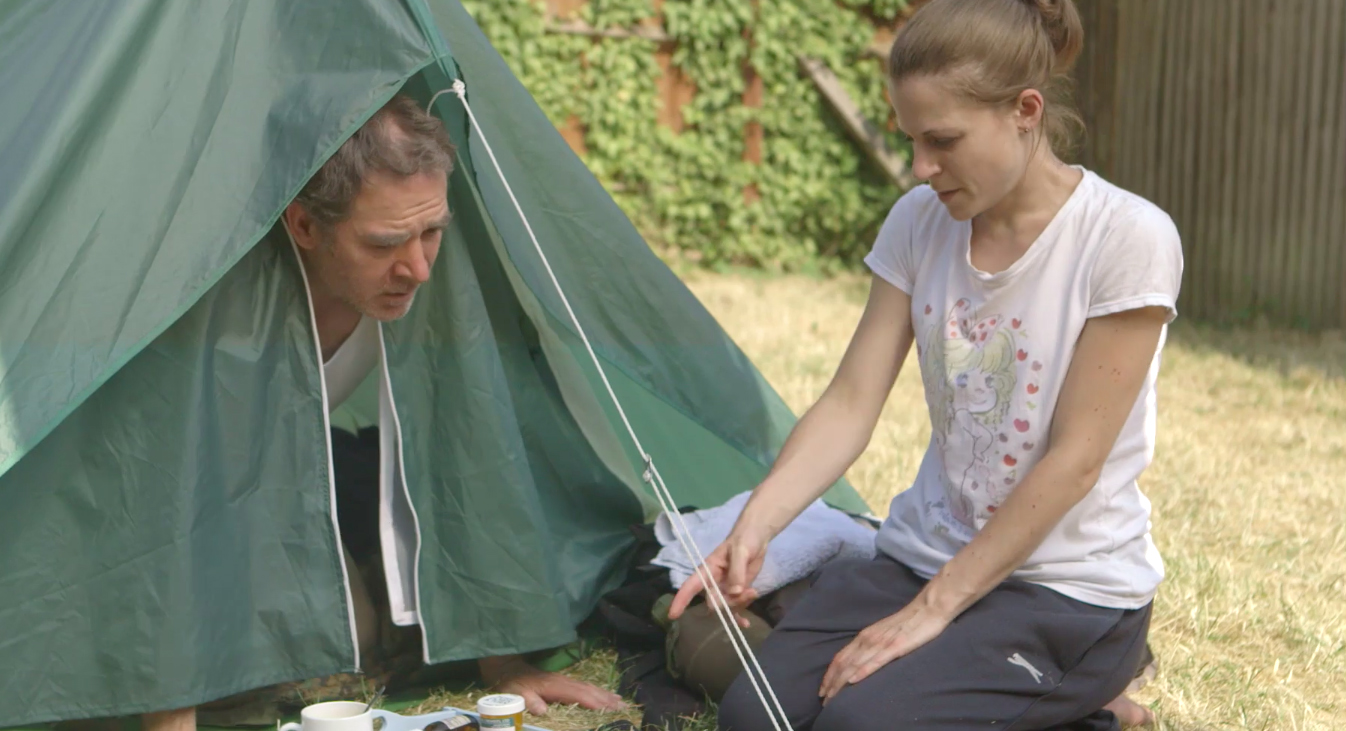 Good Grief is a uniquely pleasant dark comedy about death and grieving. Molly receives a voice mail from her seemingly emotionally vacant father informing her that her mother has passed away. Immediately following we see Molly at her father’s house reading a ‘Grieving for Dummies’ book while her father is sleeping in a tent in his backyard. Molly tries to go into her mother’s bedroom when she sees a lock on the door, tries to enter, but fails. While on the toilet talking to her brother on the phone, as one does, she hears her father entering her mother’s locked room. She rushes out of the toilet to get into the room and her father makes every effort to prevent her from entering but she fights through. Upon entering the room Molly is surprised with a colorful display of her mother’s dildos, whips, chains, and an array of pornographic polaroids of her mother plus various men and women.

As if dealing with her mother’s death and discovering her mother’s sexual habits weren’t enough, Molly discovers that her father isn’t in fact her biological father. He explains to us that while he was out on deployment Molly’s mother would sexually engage with various partners, both men and women, and one of those men is likely her father — at least technically. When this is revealed it becomes clear that even though dad sleeps outside in a tent and leaves inappropriate voicemails, he is everything but emotionally vacant, instead possessing great emotional fortitude.

As if the sexual paraphernalia wasn’t enough to spark your interest what’s even more interesting to know is the inspiration behind the film. Writer Rachel Stubbings tells us her key inspiration is death and Good Grief is loosely inspired by a personal experience at a friend’s wake. “At a friends wake, loads of his secrets were aired but he wasn’t there to defend himself or give his side of the story. There was a lot of anger, but no place to direct it. It sent us all a bit mad with grief and anger and sadness.” One can only imagine the stories being told at this friends wake. Interestingly enough we don’t quite see the need to defend her mother. Although Molly is incapable of making toast, she deals with the discovery with as much grace as a person could.

Despite explicitly dirty pictures of naked women with their legs spread open, the film itself leaves a lot to the imagination. The toys and images we see trigger an archive of images we’ve seen (or at least some of us have seen) in movies and television. In some ways we look at the toys and think to ourselves exactly what Molly is thinking, “what on earth was she doing with all those things?”, yet in reality, we know exactly what was up.