A heartbroken girl gets into a taxi. Ten minutes later, the driver is fighting for her life.
READ REVIEW
Next Previous 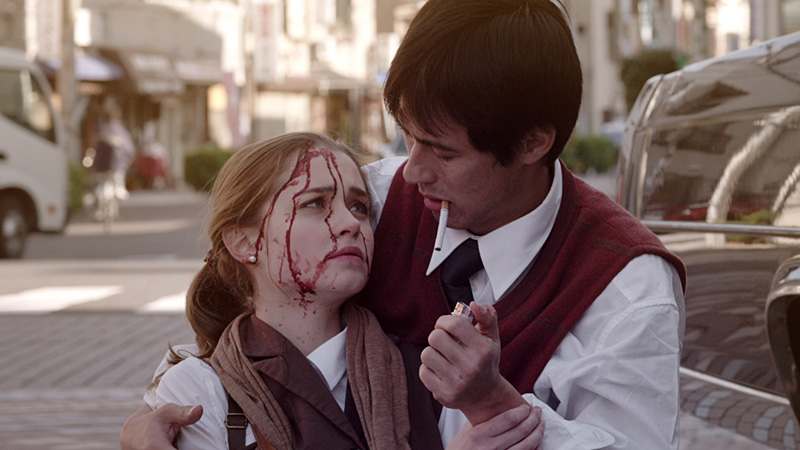 After watching, you’re likely to remember Burning Hearts as righteous ode to arcade rumblers like Double Dragon and Final Fight — that is the film’s most dramatic and unexpected sequence — but the whole is a powerful mashup of diverse interests that add to the implicit mythology of that showy sequence and it turn reveal the unique and exciting perspective of writer/director James McFay.

A struggling model in Japan, Elle is at the end of her rope when she uncovers an affair between her American boyfriend and her Australian best friend. Heartbroken, she runs off and doesn’t  forsee the trouble she’ll shortly find herself in from some yakuza types, nor the unexpected connection she shares with Kazu, the taxi driver who will save her.

There are certain elements of the film that are less polished, and have turned off viewers I know. Many cannot get over the awkward verbal delivery of Anna Shpak as the Ukrainian model, living in Japan and speaking in English, however Burning Hearts is one of those films that is so utterly perfect in the short form and so unexpected that minor offenses can be easily forgiven.

Frankly, the climactic fight scene is just really well done. McFay has relationships in the Japanese stunt community dating back to work he did on Power Rangers, and he frequently writes scripts to take advantage of their unique skills. The model angle is the legacy of previous work as well, his medium length film, Tiger,  about foreign models in Tokyo and their isolation and loneliness. Burning Hearts is very literally a mashup of the two backgrounds and does honor to both. The opening monologue from Kazu brings him into the world of Tiger, an anxiousness over potential and the failure to meet it, an aimless sense of purposelessness pervading his psyche. Elle aternately fits very naturally into a wounded damsel in distress role common to the macho action genre, however the development of her heartache and the novelty of her background  provide pleasing depth to the character.

I personally love genre work, and love Japanese culture, so the fact that McFay is able to permute these familiar elements in a style that feels fresh pleases me greatly, and I really look forward to new work. McFay announced late last year that he’d wrapped a new short Ariadne. Check out his website for updates!