In 2021, an imprisoned journalist facing execution contemplates a desperate escape attempt in order to return to his wife and newborn child.
READ REVIEW
Next Previous 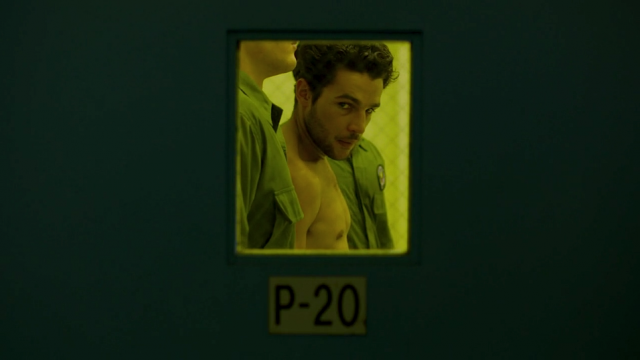 Thriller about Hope in Live-Action
Directed By Todd Wiseman Jr.
Produced By Hayden5
& Vulture Pictures
Made In USA

In a not-so-distant future, Joseph Michaels (Christopher Abbott – HBO’s Girls, Martha Marcy May Marlene) finds himself  prisoner in a tightly-run government facility where the only opportunity for escape is death. He and dozens of other journalists have been rounded up – taken captive by their own country – for reporting on the uprisings happening all around them, a new American Revolution, if you will. Before he can stand trial, he’s stripped, chained-up (in an incredibly agonizing fashion, his arms lifted behind his head to the point where they look like they might break), and forced to watch other journalists’ executions. Then, the gun is turned on him, his apparent death all the more imminent. But as he closes his eyes, dreaming about home – about the wife and newborn child he left there – the unthinkable happens: the executioner’s gun jams. Time to make a run for it…

Premiering at the 2013 Tribeca Film Festival, The Exit Room has made its way online, armed and ready to thrill with the best of them.

Updating a classic short story (whose name won’t be mentioned here, lest the ending be spoiled), Writer/Director Todd Wiseman, Jr. crafts a roller coaster ride of a short, a kinetic thriller than unspools with precision and emotion. Featuring arresting production design (futuristic steampunk), beautiful cinematography, and deft editing, The Exit Room provides the audience with an intense and visceral experience about hope in the midst of a disaster, one that feels eerily more realistic – and plausible – after the real-life violence towards journalists during the Arab Spring (which Wiseman said he used as inspiration).

As “Joseph”, Abbott electrifies, commanding every second onscreen with a tortured deference – even more impressive considering he only has a handful of lines throughout the film. By filming many of Abbott’s scenes in extreme close-up, Wiseman dares us not to connect with the journalist “everyman”, capturing Joseph’s desperation and sweat with an authentic brutality.

After raising funds from both Kickstarter  and private investors, Wiseman, Jr. and his team shot in several abandoned locations around New York City and State, at times apparently so worried about the locations that the crew had talked about wearing full haz-mat suits for the shoot’s duration. Wiseman, Jr.’s production company, Hayden 5 Media, is certainly keeping busy; they recently wrapped a Nickelodeon web pilot and have several feature-length projects in development. You can find out more about the entire Hayden 5 team at their website.