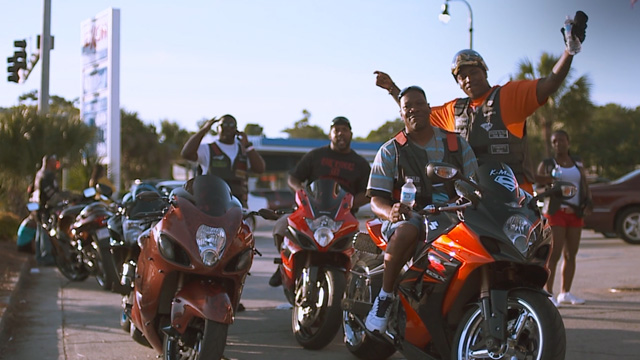 With three films previously featured on the site, documentary filmmaker Sean Dunne has become somewhat of an institution on Short of the Week. Already introducing us to hustling bowler Rocky Salemmo, running-obsessed country music singer Jonny Corndawg and clans of face-painted Juggalo’s, Dunne’s latest short takes us on a tour of annual gathering Black Bike Week and the dedicated community it attracts.

Starting over thirty years ago in 1980, this yearly congregation unites black bikers from all over the US, as they spend the weekend riding and partying hard. “A whole lot of bikes, a whole lot fun,” bikers male and female, young and old spend Memorial Day weekend in Myrtle Beach, South Carolina swapping stories and showing off their rides, unified through their love of the motorcycle. Following the success of American Juggalo (Dunne’s previous film was awarded the ‘Best Documentary’ accolade in our SotW Awards 2012), Dunne once again turns his gaze to an enthusiastic subculture of American society and provides another eye-opening and entertaining insight into a group of devotees.

Serving-up another stylized slice of Americana, the director turned to his regular collaborators to ensure Black Bike Week once again had all the markings of a Dunne documentary. Working on his last three shorts and his recent feature Oxyana, cinematographer Hillary Spera is once again the woman charged with capturing the event with her crisp, digital photography. Weaving her way through the masses of attendees, photographing both rider and their rides, Spera’s camera mingles with crowds giving us a view so close to the action and so vivid to the eye, it’s almost like you can almost smell burning rubber and grease. However, it’s in post-production where the success of Dunne’s short really solidifies and once again the director turns to his usual filmmaking cohorts to provide the rhythm and drive to his documentary. Taking the role of editor, Kathy Gatto’s (Gatto has worked on all of Dunne’s films except The Archive) cut playfully skips from biker to biker, overlaying memorable soundbites to Spera’s energetic cutaways of the camera-loving bike fanatics. Adding to the momentum of Gatto’s edit is another previous Dunne collaborator, as composer David Nyman (American Juggalo) scores the film with a pulsating Drive-esque soundtrack, that plays an essential part in portraying the raw energy of Black Bike Week.

Still riding the high from the critical acclaim received for his debut feature Oxyana (Dunne scooped the ‘Best New Documentary Director’ award and a ‘Special Jury Mention’ in the ‘Best Documentary Feature’ at this year’s Tribeca film festival), we weren’t expecting a new Dunne short in 2013 and the appearance of Black Bike Week at the end of the year has certainly come as a welcome surprise. Whilst it might not be his most engaging or revealing film yet, it’s another assured addition to the filmmaker’s back-catalogue and an indication the director has no intentions to rest on his laurels.