A mysterious Stranger kidnaps Peter Pan on his return to the Darling House.
READ REVIEW
Next Previous 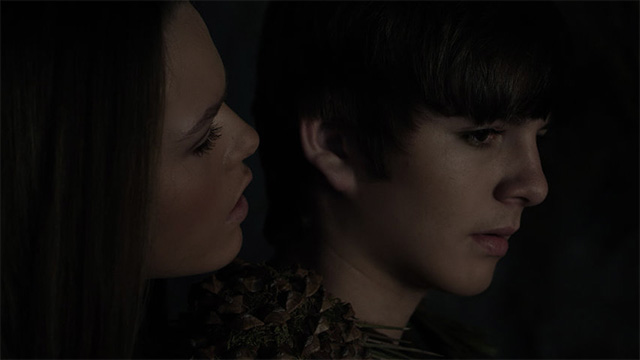 Created as his thesis film at Chapman University, Kellen Moore’s short East of Kensington introduces us to the dark side of a literary favourite, as we take a twisted journey with J. M. Barrie’s most famous creation – Peter Pan. Presenting an introspective look at the characters we’ve all come to know and love, this new twist on a classic tale invites viewers to explore a different side of the boy who never grew up.

Years after Peter Pan and the Lost Boys have overthrown the pirates, Peter visits London to return Wendy to Neverland and is kidnapped by a mysterious Stranger residing in the decaying remains of the Darling House. Peter is forced to confront a harsh reality that challenges his innocence.

Eager to find out how filmmaker Moore decided to tackle such a famous story, I emailed the director to discuss exactly what inspired him to make a short featuring one of the most notorious characters in fiction and to discover exactly how audiences have reacted to this new spin on such a beloved tale:

“I really wanted to tell a personal story and in a way that would leave a strong mark. My brother has and continues to struggle with severe drug addictions which really impacted my childhood and entrance into adulthood. I didn’t want to make my thesis about drugs, but I wanted to dive into some very personal themes that I found related really strongly to the character of Peter Pan. Once I sort of implemented my realities into JM Barrie’s story, I found it to be a really intriguing storyline that I was inspired to explore.”

“You CAN’T do that to Tinkerbell”

“When the script was still in the draft stages I had several people tell me “You CAN’T do that to Tinkerbell”. And that sort of strong reaction I found both really exciting (because I knew I was getting a reaction), but also a bit nerve wracking (because I wasn’t sure if that reaction was necessarily good).”

Continuing the impressive tradition of Dodge College productions that have featured on Short of the Week, Kellen and his team have created a film with a visual style that equally matches the ambition of its narrative. Utilising the $10k+ they raised on Indiegogo, along with the University soundstage space, equipment and talent pool (including SotW alumni Joe Sill as Director of Photography), East of Kensington’s production values transcend the levels you usually expect from a ‘student film’. Then again, there aren’t many student films that could name Gary Goetzman (producer and co-founder of Playtone Productions) as project mentor or employ post-production house Light House (Ender’s Game, Short Term 12) to colour grade their film.

Raising another $16K+ on Kickstarter to send East of Kensington to festivals worldwide, along with promoting their film through a fervent social media campaign, has already seen Kellen’s short gain a passionate and vocal online following. Now with the film finally released online, its time to see how you internet peeps will react to this tale of not-so happily ever after.