When an old childhood friend tracks him down, Quinn is confronted with the dilemma of choosing to remain idle in a city run by the corrupt Coreley Corporation or finally finish the war he never wanted to be a part of. A viral prelude to a planned TV series
READ REVIEW
Next Previous 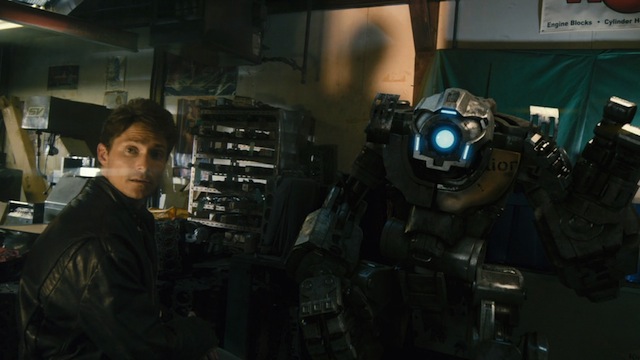 The latest in a line of exciting Sci-Fi VFX projects to hit the web, industry animator Adam Marisett, who has done animation work on titles such as District 9, Iron Man and the forthcoming Ender’s Game, takes on his directorial debut.

While strictly in the calling card/teaser category of the genre (Marisett plans to adapt the concept for TV), AMP distinguishes itself in the quality of its human interactions, and the care it puts into its backstory rather than being solely an action-spectacle.

The main VFX piece in the work is Amp, a hulking robot who is friends with our main character, Quinn. We’re informed that Quinn’s dad waged a war against the nefarious Coreley Corporation in year’s past, but that the war is now over, and Quinn is doing his best to leave it behind. His main focus is to scrap together whatever odd jobs will allow him to purchase the batteries needed to power Amp’s operation. When a childhood friend looks for help in her battle against Coreley, Quinn and Amp are drawn back into the fray.

The production is charmingly indie. Shot over the course of two days, the entire budget was spent on the interior locations and the exterior shots were grabbed guerilla-style. According to the director, 18 months of nights and weekends followed in order to get the VFX shots perfected. The support of Gabriel Napora’s Triton Films, which produced Neil Blompkamp’s early short Tetra Vaal, helped.

From a pure technical level, the film is not over the top in terms of its design, but is executed well. The sophistication of animation in these films is definitely improving, and we’re starting to see robots as characters rather than props. AMP continues this trend which we’ve seen in many of the viral shorts this year such as Dr. Easy, Gumdrop and Abe.

Storywise, familiar themes pop up, showing off potential influences: the son drawn into acting on his father’s crusade is Tron: Legacy and too many other films to count. The gruff protagonist who has left his war behind, trying to get by by skirting the law in a gritty setting, recalls Firefly, but likewise, too many other properties to count. The use of the cheesy wipe transition is likely a shoutout to Lucas and Star Wars. AMP is not lackluster though despite this familiarity. The direction and recombination of these story elements seems very promising: strong women, shady corporations, kickass robots, all wrapped in an underdog story, that seems awesome enough to me! Furthermore there is a lightness of tone that is difficult to foster, but which Marisett achieves, which makes AMP very inviting. Of the many sci-fi shorts teaser shorts we highlight, AMP would be one the properties I would be most pleased to see expanded.