The quiet anxieties of wood.
READ REVIEW
Next Previous 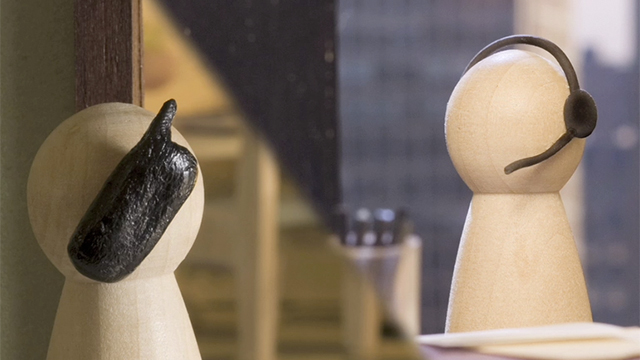 Filmed using inanimate wooden characters, existing in an almost motionless wooden world (there is the rare inclusion of movement – a ticking clock, a blinking light etc) and employing static camera shots throughout, on paper Hollerings: 3 Stories in Wood doesn’t sound like the most engaging of shorts. Then what it is about Lara Gallagher and Andrew Ellmaker’s 5-minute film that makes it such a captivating and likeable watch?

“He hated eating whilst no-one was watching, so he decided to sit as still as he could, like one of his video games on pause.”

Separated into three parts ‘Hot Hell,’ ‘Dimestab’, and ‘Hotel’, Hollerings is the tale of everyday life as we witness family arguments, failed DIY attempts and problem children through the “eyes” of three family members. Whilst this synopsis may not sound too unexpected for a short film, there is one aspect of production that is a little unusual – the actors can’t speak, move or portray emotion.

Set within detailed miniature sets, our three faceless protagonists are brought to life by the rich vocals of Ellmaker – playing the compassionate narrator in this innovative story. Adding essential depth and empathy to this beautifully scripted tale, the co-director’s dulcet tones guide us through the trials and tribulations of a bickering husband and wife, whilst also vocalising their confused son’s attempts to understand.

Originality and ingenuity are traits we’re always seeking in films here on Short of the Week and whilst we’re regularly bowled over by the technical prowess and FX wizardry on display, it’s not often it’s the approach to storytelling that’s the standout aspect of filmmaking. Gallagher and Ellmaker’s film initially hooks us with its unusual methods, but as we become accustomed to its unconventional visual style, it’s ultimately the story that keeps us gripped throughout. If I had one small criticism of this standout short, I did find the acting a little wooden.