A couple of young boys are put through a terrifying gang initiation process.
READ REVIEW
Next Previous 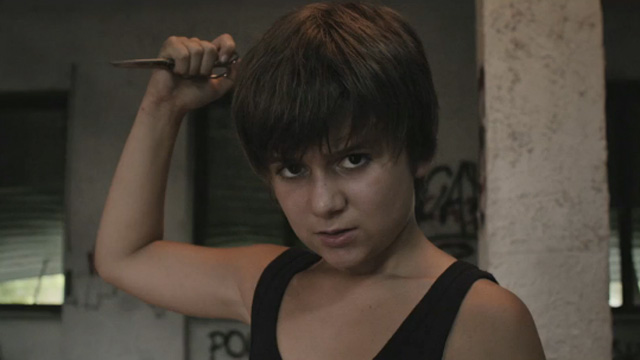 Just over a year after we bought you his debut mockumentary-styled short Lovely Monster, Italian director Francesco Calabrese returns to the world of short film with his latest project I Killer. Part of the Nowness Shorts on Sunday series, Calabrese’s second film – a bold tale of young boys wanting to fit in – proves that his striking introduction was no fluke.

If you die when you’re ten, you might as well not even been born

WC Fields once famously declared “never work with children or animals”, but Calabrese obviously used the writer/actor’s infamous quote as a challenge, rather than a warning. Hiring 20 non-professional young actors to play the gang in his film, the director’s low-budget production was made all the more difficult by his adolescent casts lack of attention – “they can’t focus for more than two hours, after that it’s just a mess.” Despite this added demand on the shoot, the production values of Calabrese’s film certainly haven’t suffered, with every aspect of his filmmaking presenting itself as exceptionally well-considered. From the detailed cinematography of Mauro Chiarelle and Luca Esposito to the design of the opening titles and end credits, the subtle visual FX work to the eclectic soundtrack, I Killer has the signs of confident direction embedded throughout its 12-minute duration. Eager to find out more about how he achieved such a well-rounded short, Calabrese told Short of the Week about his crews dedication to the shoot:

“Nothing comes very easy when you’re shooting a low-budget film with 20 non-professional kid actors. The crew and I put our souls into the production and when you have a compelling story to start with, the rest is just the result of hard work. I’m very meticulous in what I do and the people I work with are usually like minded, so we set a few stylistic rules and everyone involved did their best to stick to those rules. Everything else just comes along with the passion and innate talent of the filmmakers involved.

Based on short story Prove di Coraggio (Tests of Courage) by Italian writer Nicola Lombardi, Calabrese describes his narrative as “character-driven, universal and thrilling” and for me it was the universal element of his film that made it such an enjoyable watch. Although the plot of his film might be more dramatic than realistic, the topics covered are ones the majority of us can easily relate to. On the outside this is a tale of a juvenile gang with some pretty extreme inauguration procedures, but at its core it’s a story about wanting to be part of something bigger and wanting to fit in.

Up next for Calabrese is a new short, the feature adaptation of Lovely Monster and relocating to LA – sounds like a quiet summer.