After an accident on the water, a deep-sea diver must confront the deadly nature of his profession and the responsibilities to his family.
READ REVIEW
Next Previous 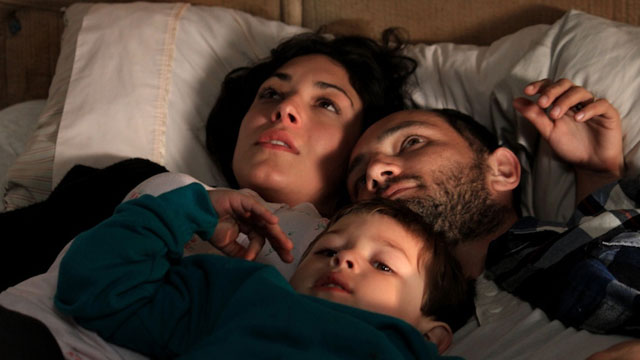 Admittedly, one thing that a lot of short films lack is strong character development. After all, how can you deeply flesh out the inner workings of a human’s internal emotions in such a short interval of time? Well, in Contra El Mar (Against the Sea), Richard Parkin manages to pull off such a magic trick. In his 19 minute student work, we are treated to film that is all about character development—a portrait of a young marriage struggling to find common ground amid difficult life choices and uncertainty.

Hector, our protagonist, bides his time as a deep-sea diver, working in a decidedly dangerous profession in order to provide for his wife and young child. He’s saving up for his own fishing boat, dreaming of a better and easier life. But, when the danger of his current occupation is revealed via an accident, he finds himself at odds with the very people he’s providing for.  It’s a personal conflict, one that Parkin arrives at organically. As a result, the film displays a flurry of emotions—from sadness to despair to hopefulness.

Contra El Mar isn’t exactly tailor made for internet consumption. It’s gorgeous 16mm visuals and lingering pace, honestly, belong on the big screen. But, I encourage all to be patient with this one—to sit down and lose yourself in Hector’s story. Parkin’s film is subtly layered with different kinds of conflicts, from a man fighting against the constraints of his class to a young wife who doesn’t want to lose her husband both literally and figuratively. There’s a lot to chew on here, which ultimately, makes the viewing experience so rewarding.

Parkin shot the film over the course of five days in a small fishing village just south of Rosarito, Mexico. All the main roles were cast with actors based in Tijuana and Ensenada. Its “local flavor,” is certainly a part of its allure—the film feels real. And, really, that shouldn’t be surprising. In 2006, Parkin spent several weeks living and working alongside a group of sea divers in Mexico, not far from where his own mother was raised. Those experiences directly inspired the creation of the film.

Contra El Mar has already been showered with numerous accolades, including mentions from both the Student Academy Awards and the Directors Guild of America Student Film Awards. Parkin is currently completing his M.F.A. in Film Directing at UCLA and is writing a feature length script based on Contra El Mar. He’s also deep in post production on his latest short film entitled Angeles, a collection of vignettes all set in Los Angeles. Be sure to keep up with Parkin’s work on his website, www.richard-parkin.com. You can also follow him on twitter @richardwparkin.
Vimeo Film Website
LIKE TWEET