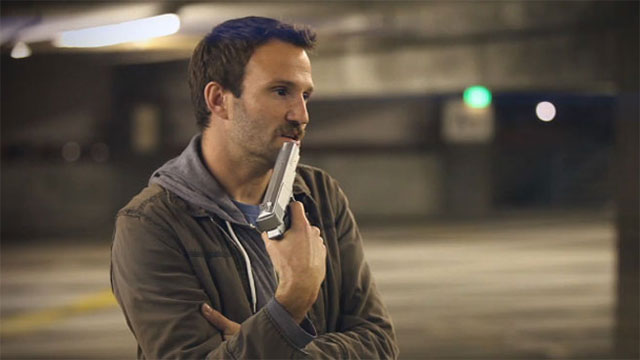 Exploring how far people will go to ensure they don’t break an oath, Sam Molleur’s dark comedy The Promise takes one friend on an extreme path of motivation to help another out of his current rut. Speaking to me over email, Molleur revealed how the concept of his film was inspired by the idea of “how some friends would playfully wish for a kind of death-by-murder clause as motivation to change their life for the better.”

Whilst the premise for Molleur’s film might seem a simple one, it demands perfect execution and leaves any shortcomings the film might have with nowhere to hide. With crisp, clean cinematography and snappy, precise editing the crew behind The Promise certainly deliver on production values, but it’s in the dialogue and performances where this short really excels. With lead actors Curt Neill and Elisha Yaffe also involved in writing the script, I was eager to find out from Molleur what the writing process was like and whether there was any improvisation on set:

“The writing process was pretty simple.  I wrote the first draft, and then a subsequent one after the three of us did further improvising and revisions. During the shoot, it was a mixed bag. Some sequences of dialogue were from the script, others were much more improvised. That’s definitely what I prefer – it makes the shoots more dynamic and fun and what’s captured are much more natural, realistic line deliveries. I don’t care much for the need to have anything more than the characters and a couple cameras. The focus was always on making sure the performances carried the story about a very unusual conversation based off a very relatable idea. And especially, if the guys were funny enough, hopefully it would distract from the fact that I suck at visual effects.”

Proving once again that simplicity can be key in making a successful short, Molleur’s comedy The Promise shows exactly what filmmakers can achieve with a minimal budget, some spirited acting and a solid script. With an abundance of films in the field, comedy is arguably the most hit and miss genre in the world of short film – so when a film like The Promise comes along and gets it so right, you really need to take a minute (or seven) to revel in its excellence.