Jesus doesn't only raise Lazarus from the dead...A hilarious, campy retelling of what didn't make it into the Bible.
READ REVIEW
Next Previous 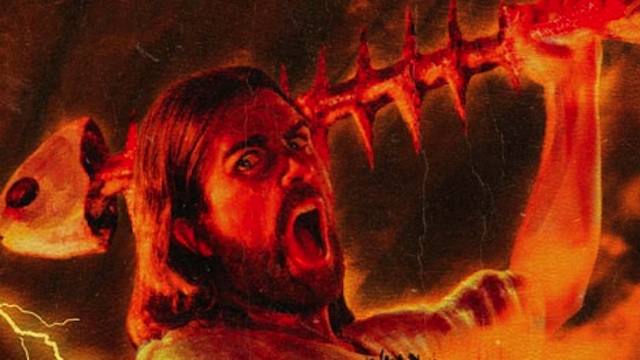 On the third day, he rose from the dead.” – New Testament, Bible. Or, according to this film, he rose THEM from the dead. Fist of Jesus is a proof of concept short for the prospective film, Once Upon A Time in Jerusalem. Short filmmakers Adrian Cardona and David Munoz pay tribute to their love of low budget schlock in this campy retelling of New Testament parables. This mythos mash-up brings religious tales and pop culture together for a wild, entertaining ride.

Jesus is performing his sermon in the desert when he’s interrupted by a grieving father bearing news of his dead son. The prophet calms Jacob down by trying to convince him that his son Lazarus is simply in a deep sleep. Jesus follows Jacob to his son’s bed, in hopes of a miracle. Followers witness Jesus’ power by commanding Lazarus to resurrect. A moment of celebration is destroyed by Lazarus’ new ravenous appetite for humans. Jesus’ childish reaction gives a pregnant pause to the situation before chaos resumes. People scatter, bringing the new flesh eating disease with them. Can the patrol of Roman soldiers bring the crowd under control? No. Their spears and armor are no match for the boil-infested crowd. Can the Pharisees fight back? No. Their vulnerability is increased with no weapons for defense. Jesus has no choice but to finish what he started.

Cardona and Munoz use gratuitous tricks within genre filmmaking to their advantage. The humor is apparent through timing, dialogue, and situational comedy. Buddy cops, Jesus and Judas, innocently start a zombie apocalypse among civilians of Jerusalem, Roman soldiers and cowboys. Cowboys?! Ok, I thought the ninja star throwing fish and the chainsaw fishbone was extreme, but at least they were sticking to the story. Mixing time periods to include a gun wielding sheriff is just absurd and hilarious. Jesus is able to duplicate seafood, crush his enemies with a crucifix, and raise the dead (eventually in a non-lethal form). While some may consider this blasphemous, I feel this is the way Jesus would act in today’s film culture, as a badass superhero. As for grindhouse fans, you will certainly have one more film for your collection.