Kemi lives and works in the murky slipstream of a North London pub. As the booze flows the line between who belongs behind and in front of the bar becomes increasingly blurred.
READ REVIEW
Next Previous 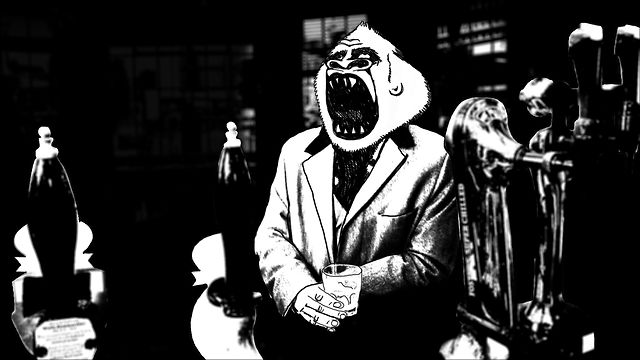 The third in a trilogy of rotoscoped shorts, after Stand Up and A Family Portrait, Joseph Pierce’s latest short The Pub sees him take his distinct style into the inner-workings of a traditional London boozer. Showcasing his eye for unraveling the hidden nature of his subjects, Pierce’s latest animation once again sees him blend real-life documentary elements with fantastical, surreal animation.

Described as a work of self-loathing by its director, the plot for Pierce’s most recent short was born from his time living above the very pub in which his short was filmed. Taking a year to complete from start to finish, The Pub provides an insight into the life of a foreigner (Kemi the barmaid) living in the heart of England’s capital city. As the alcohol flows and the establishment’s inhabitants drift in and out of Kemi’s orbit, her view quickly begins to wrap and we’re presented with an almost zoological observation of the film’s multitude of characters.

Providing an astute glimpse into the culture and tradition of his homeland, like his two previous animations before, Pierce should once-again be applauded for providing a slice of Britain rarely captured on film. Probably his most ambitious short yet, The Pub sees Pierce build on the sterling work he produced for Stand Up and A Family Portrait and push both his approach to narrative and technique to dizzying new heights. Although, The Pub might signal the end of the directors admirable rotoscope trilogy, lets hope there’s new and challenging work appearing on Pierce’s resume in the not too distant future.