CURRENTLY OFFLINE—A Disney animator ventures out on his own to create this beautiful Oscar nominated short about two creatures who were made for each other.
READ REVIEW
Next Previous 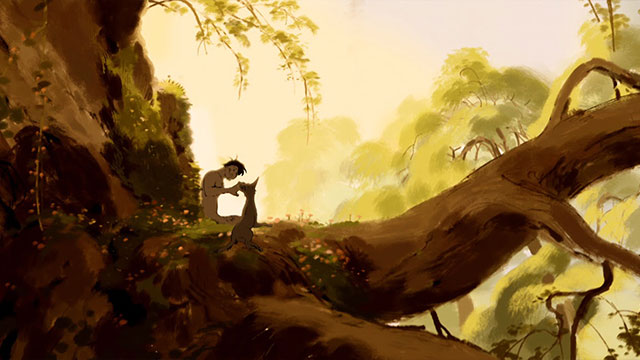 Andrew S Allen
This Oscar-nominated short and last year’s Annie Award winner has been one of the most celebrated independent short animations from the past year. Adam and Dog tells a beautifully simple tale of two species that were made for each other. With no dialogue and little music, you become lost in the large, painterly worlds Disney artist, Minkyu Lee has created. Adam and Dog seems to draw inspiration from legendary Disney background illustrator, Eyvind Earle’s awe-inspiring monumental landscapes. Indeed the short seems to resurrect the sense of wonder that once inspired audiences in classic Disney films like Bambi, The Rescuers Down Under, and The Lion King. But Minkyu has injected his own aesthetic that is even more loose and expressive. You see individual brush strokes and rough edges—the look of a world unfinished. Minkyu, who works for Disney, made the short with friends from all over the animation industry including Disney, Dreamworks, and Pixar. And yet the short is an independent production made not with the help or sponsorship of any studio but built off the drive and passion of these dedicated storytellers. Now they’ve earned the highest honor—an Oscar nomination—where they face off against a familiar rival—the official Disney-produced, Paperman.
YouTube
LIKE TWEET