When young Atari Withers gets annoyed with the little robot that follows him everywhere, he tries to leave it, sell it and smash it up—but this robot is more than just a toy.
READ REVIEW
Next Previous 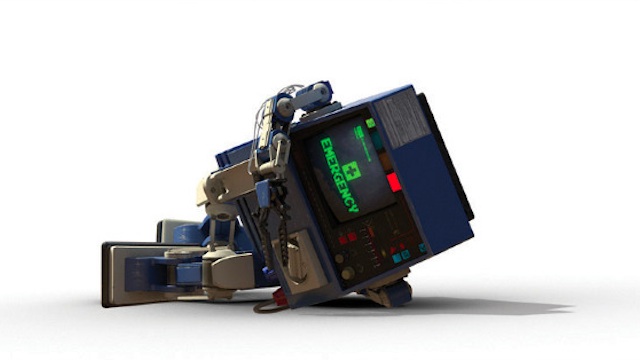 If you follow Short of the Week somewhat regularly, you’re probably well aware of  Blinky™, the 2012 acclaimed film about a boy and his HAL 9000-esque companion. On first gander, Paraphernalia may seem to be built from similar parts. Young, bratty kid? Check. Bulky cyborg sidekick with hidden intentions? Check. Impressive robot special effects? Yup. Got that too.

But, despite the similarities, I encourage you to invest 12 minutes of your time, for I can guarantee that Paraphernalia will take you to places you never expected. You may think you have a handle on this film’s intentions, but be assured, you don’t.  This isn’t some sort of cautionary tale about self-aware robots overthrowing their human overlords—that age-old cinematic trope we’ve seen a gazillion times. Fortunately Paraphernalia develops into something much more, simply engaging you at first, but ultimately, emotionally moving you by its end.

The premise is easy enough to understand: young Atari Withers (seriously, if you don’t think that name is awesome, I doubt we can be friends), is constantly followed around by a robot companion.  The big issue? His mechanical chaperon is kind of lame. It doesn’t have any guns. It moves sluggishly and doesn’t have any cool gizmos or flashy doohickeys.  And, so Atari is stuck with the most boring robot ever—or so it seems.

From a character standpoint, the film does a lot of interesting things; at the start you mainly feel for the robot, not the human protagonist.  Our clunky mechanical hero just wants to be of service to his master, yet, Atari constantly rails on him, continuously putting him down or treating him poorly. Why is Atari being such a little punk? Why does he hate such a benign, seemingly innocent presence? More importantly, why is he unable to shake its grasp? The robot is always there, and Atari’s rage grows.

Well, without spoiling too much, Atari has a reason to be angry. The film deftly handles its late narrative turn in way that makes you sympathize with both leads while also managing to provide a childlike perspective of the world—the result of imagination used as a tool to cope with life’s toughest challenges.

Winner of best drama at the prestigious LA Shorts Festival, Paraphernalia has already received a fair amount of accolades.  For director John Williams, that seems par for the course. Beyond directing high profile music videos for Coldplay and Radiohead, his other shorts have received equally impressive acclaim.  Now that Paraphernalia is online, we can only hope that short enthusiasts will provide Williams with the online viewership he most definitely deserves.