The Girl is Mime

Did the mime commit the crime? Clive Buckle is being questioned about the murder of his wife. The police are convinced he did it—if they could just find the weapon.
READ REVIEW
Next Previous

The Girl is Mime 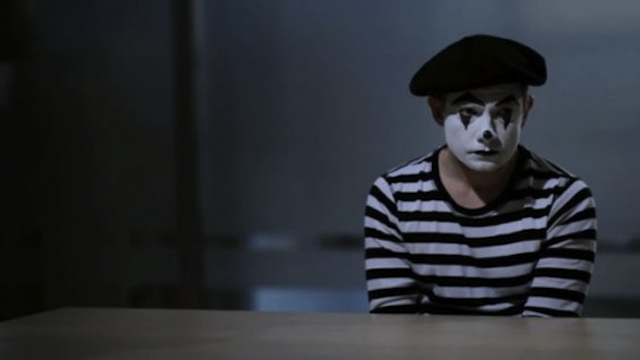 Created as part of the 2010 48 Hour Film Project: London and featuring The Hobbit star Martin Freeman in the lead role, The Girl is Mime is a clever comedy from British director Timm Bunn, that sees a mime-artist embroiled in a murder investigation.

Not content with the restrictions of the competition, in which the director and his team had to write, shoot and edit their film within a 48 hour period. Bunn and his team decided to constrict their selves further by making a “silent film about a mime artist”, with the majority of the action unravelling around a muted police interrogation.

With its mime-heavy narrative in place, the success of The Girl is Mime rested largely in the casting of its silent protagonist and Freeman seems perfectly suited to a role largely consisting of physical comedy and overstated facial expressions. Although Freeman delivers all the comedic moments with impeccable timing, the role also demanded a touch of darkness to be lurking in the background of Clive the Mime and again the British comedian injects just the right amount into his performance.