A contemporary re-imagining of the duel between Alexander Hamilton and Aaron Burr. The film explores the idea of history as a contested narrative. Also, it is a comedy.
READ REVIEW
Next Previous 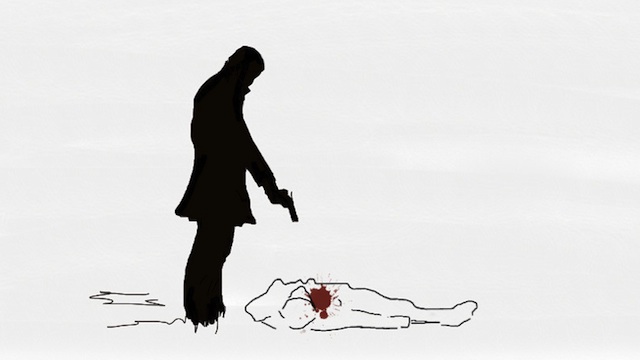 From the anachronistic glocks in hand to the dramatic stirring of David McCallum on the soundtrack, the opening seconds of Aaron Burr, Part 2 boldly announce that this will not be an ordinary bio-pic. McCallum’s track will forever be marked in popular memory by the gangsta swag Dr. Dre imbued it with, a fitting example of the way cultural evolution can overwrite the past. Likewise, as we see the fateful scene of Aaron Burr shooting Alexander Hamilton over and over again with Rashomon-like variation, filmmaker Dana O’Keefe’s central theme of “History as a Contested Narrative” shines through with perfect clarity.

History is often criticized for its emphasis on “Great Man” theories, but rather that subvert that inclination, O’Keefe reappropriates the mythologizing. What if the figures of the past could speak in their defense? The voice of Aaron Burr in the first person, filtered and echo-y, reaches us through the centuries to question his current ignominy.

“I built this country, I founded Chase Manhattan Bank, I was elected President of the United States, I was Emperor of Mexico, but there are no monuments in my honor. History is a contest, one that I have lost.”

The effect is brilliant. Reimagined as a brooding anti-hero, Burr (Alex Kliment) enchants. It’s a crazy comparison, but with the culture obsessed as it is, Burr reminds me of a vampire, a historical Lestat. Beautiful, dangerous, he haunts the modern lanscape, filled with regret, damned by an unforgivable act committed ages ago.

Mirroring the theme, if History is a contested narrative, the narrative of the film is a contest between its various styles. Amazingly the film has been programmed as both a fiction and documentary film, playing reputable venues like SXSW, HotDocs, and being nominated for the Cinema Eye Honors, as one of the best documentary shorts of the year. With its archival images and historical re-enactments, it shares elements of films in the Ken Burns mode, however its playful style is much more in line with modern American fiction directors like Wes Anderson in its dramatic use of music, slo-mo, and on-screen text.

Whatever you categorize it as, it’s great. Included in the remarkable ShortList Online Film Festival some months back, I’ve now seen the film some 6-7 times—the highest rewatchability quotient for me of any short since Umshini Wam. Given a chance, I suspect this highly original short will worm its way into your heart as well.

A fixture in the New York scene through his position as a sales agent and manager at reputable film company Cinetic, O’Keefe tells me he plans to continue in the short form, and is close to starting work on his newest film. We’ll keep you updated.