Coal queen pageant contestant Arianna Bailey competes for a crown to represent her family’s way of life. Former miner Goose Stewart lives with the memories of a mine explosion. One thing binds both families: coal.
READ REVIEW
Next Previous 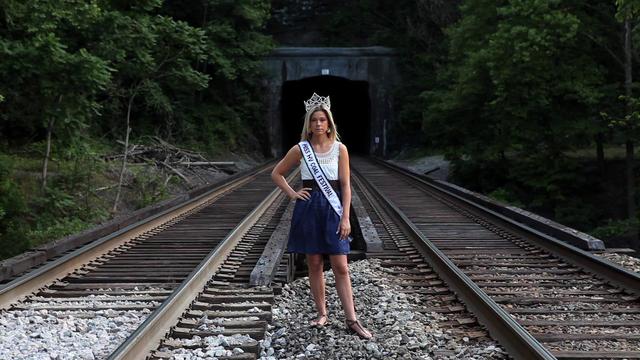 Arianna Bailey and her father both have black fingernails. While the pretty blonde’s are carefully applied, her dad’s remain black no matter how much soap and water he uses. Robby Bailey is a West Virginian coal miner, the son and grandson of coal miners. It’s a dirty and dangerous way of life, but Robby and his wife Tammy are proud that Arianna is competing for the crown of “Miss West Virginia Coal Festival.” It’s an honest living, they feel, and besides, there’s nothing else in West Virginia.

Goose Stewart is a former coal miner who survived a 2010 explosion that killed 29 other miners. The risks are never far from the minds of the miners and their families, and the danger doesn’t disappear even for retired miners like Goose. Many develop black lung or other respiratory illnesses as a result of their long term exposure to coal dust.

Director Catherine Spangler ties these two stories together effectively in this short documentary, and her lingering shots of hands illustrate a whole range of feelings about working with coal, from the worried hand-wringing of relatives to the strong and dirty hands of people doing their jobs. She doesn’t dwell on the mines themselves, preferring to show the miners with their families at home.

While some might find the idea of a coal-promoting beauty queen absurd, this short film beautifully captures the community’s uniquely ambivalent mixture of pride (in community and in “honest” work) and fear (of working conditions, potential health issues, and more pressingly, the disappearance of this way of life). Though the film is self-contained, it could easily serve as a teaser for a longer work about the coal-mining communities of West Virginia. In fact, it’s part of a thought-provoking multimedia project called Coal: A Love Story which explores America’s complicated relationship to coal, which provides 45% of its energy.