A sparse, metaphorical rotoscope animation that made waves at Ottawa, Annecy, and Stuttgart.
READ REVIEW
Next Previous 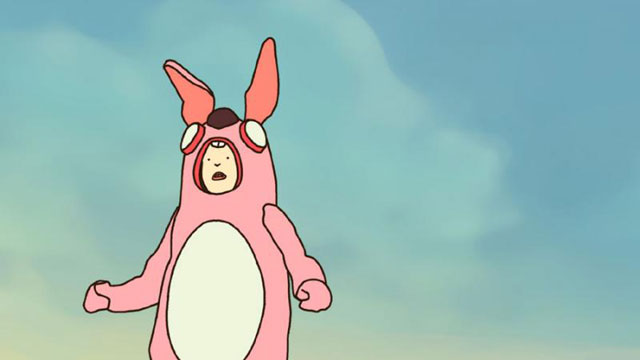 A yellow canary records animal suicides at the edge of a cliff, possibly the world. Animator Philip Bacon speaks in tongues of metaphor with his take on death and behavior. He tells this story in a way that allows the audience to create their own interpretations of the larger meaning.

The protagonist, the canary, acts as a god-like character, simply observing suicides in ritual by recording in a book then eating a representation of their species (jelly beans). He is unfazed by the animals’ obvious strife. A break in the ritual occurs when a cat is caught dragging a briefcase to the cliff. Upon the discovery, the cat flees the scene leaving the briefcase behind. Curiosity drives the canary to reveal what is in the case. At this point, the canary has a crisis of conscience. Should he be involved with the dealings of his fellow animals? Can his routine return to normal after such an interruption? Props beautifully illustrate the difficult decision-making process. The canary’s decision eventually overwhelms him with emotion. A cow helps him complete his emotional journey by reminding him that he is an animal too, not alone.

The canary character could be interpreted in many ways. He could be the physical manifestation of death, longing to be a human. Perhaps he’s a Jesus figure meddling and recording events only to be sucked into the drama of the moment then saved by Mary Magdalene. Maybe he assumes the identity of the title itself, cowardice. Or perhaps his costume has a literal meaning for humans as animals and our emotions is what eventually separates our species. This is why the short is enticing. Whichever interpretation you subscribe, this short will keep you talking for days after you watch.