The sun and moon meet on a rare occasion in this grand celestial love story animated in beautiful black & white 3D.
READ REVIEW
Next Previous 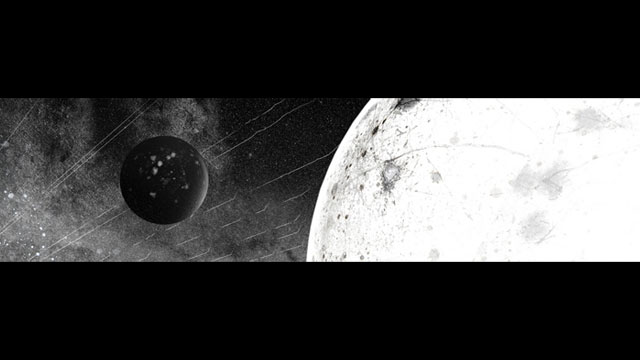 Fresh from a worldwide tour of film festivals, Racecar, an Oslo based design studio have released their first short film Kiss: A Love Story online. Directed and animated by Joseph Hodgson & Franck Aubry this super widescreen animation, presented (largely) in stark black & white is an ethereal, otherworldly short set to the haunting sounds of Stille by Bendik.

With backgrounds in music, motion graphics, directing and VJ-ing, Kiss appears to be the perfect vehicle for its creators to showcase a broad range of talents and introduce their combined flair to the highly competitive world of short film. The frame size and impressive visuals of this unusual animation will initially grab your attention, but write it off as style over content and you’re in for a surprise.

Beginning with the simple idea to explore something as innocent as a kiss, Hodgson & Aubry’s animation appears to have transcended its humble beginnings and evolved into something truly infinite and celestial. Kiss’s most refreshing quality (along with the craftsmanship on display) is its untranslatable nature and the many readings you can take from the universal themes covered within. I’ve watched it several times now and with each viewing I take something different from its story, yet every time I am moved by the power and emotion held within its brief duration.