A revenge fantasy about that jerk behind you in traffic.
READ REVIEW
Next Previous 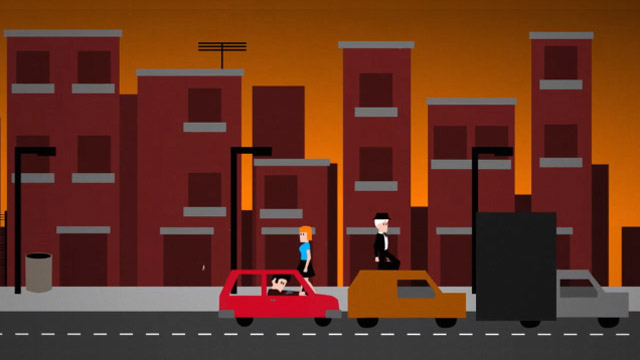 What started out as an animation experiment in After Effects, has quickly developed into a Vimeo hit for its unsuspecting creator. Dedicated by its director to all those jerks who cut me off on the road, the darkly comic Road Rage, with its imaginative chain of events, has already chocked up 40,000 views in 2 days on the popular video sharing website and is still going strong.

Taking an open approach to the creation of Road Rage, Australian filmmaker and motion graphics specialist Nick Khoo put only two restrictions on himself in creating this latest work. Firstly, “it had to be completely done using the After Effects Shapes tool” and secondly, it had to involve the use of Duik (a script allowing you to do IK rigs in After Effects). The result is a simple but charming look, full of warped perspectives and reminiscent of the heady days of 8-bit animation.

Having only finished working on his film hours before it was uploaded to Vimeo, Khoo was shocked to find upon waking the next morning that his film had certainly caught the attention of quite a few people, including Sam Morrill from the Vimeo Staff. Despite claiming this his “video isnt good enough to get on Staff Picks“, that’s exactly where Road Rage ended up and where I and many others saw it.

So with word spreading and the short film spotlight shining brightly on Road Rage, who knows what’s next for Khoo’s quirky short? Did I hear someone shout “feature’?