A man takes a ride through the afterlife with four rockabilly musicians in this rich animation featuring music by The Sadies.
READ REVIEW
Next Previous 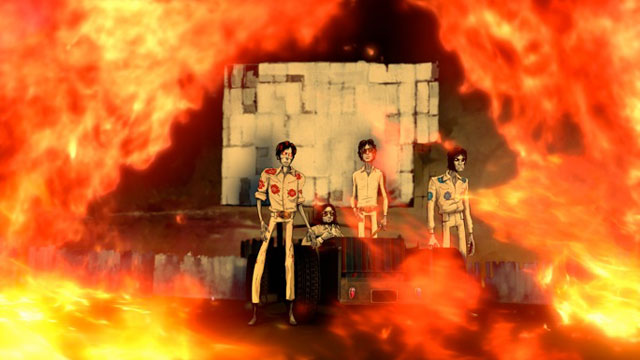 Adventure about Other Worlds in Flash Animation
Directed By Mike Roberts
Produced By Bravo!FACT
Made In Canada

We don’t feature music videos all too often, but when they feature imaginative worlds like this, they’re ripe for the picking. Rumbleseat features a man riding through purgatory in the back seat of a cruiser with four rockabillies. They stop at different destinations—a drive-in movie theater where he watches the car crash that killed him and then visits Heaven and Hell (Hell is an old west-style salon run by a demonic bartender). The film captures that Easy Rider love for the road and its wild adventures. Some people talk about death being the final destination, but these guys are true drifters even in death.

The atmosphere in Rumbleseat is great—a macabre version of an old western (oddly it reminds me of an obscure music group, The Builders and the Butchers). The music is actually from The Sadies’ album Darker Circles.

The animation is okay. It’s a little stiff at times and there are times when the 2.5D technique calls too much attention to itself—but the production design by Stewart Jones with its richness of color and textures in the environments is great. In the end, the experience of cruising through this world and meeting these wild characters is one worth having.

If you like his work, Mike Roberts is currently running a Kickstarter campaign for another short film, The New Kid.