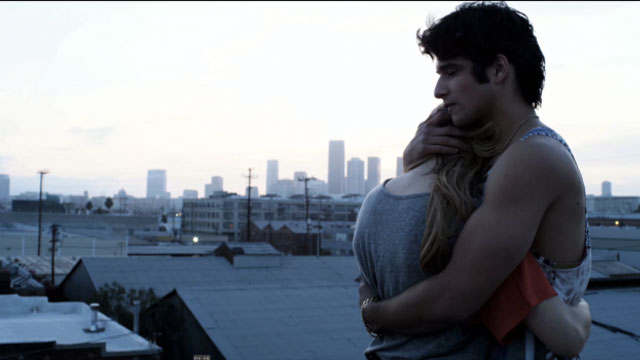 Jason Sondhi
Short media is luring more big names. Drew Barrymore and raft of young name actors like Kickass star Chloe Moretz and Community actor Donald Glover update West Side Story for the buzz-band Best Coast in this MTV-produced “supervideo”.
Supervideos are a new MTV idea, low-budget, narrative music videos designed to be platform “agnostic”, pairing big film talent with indie-superstar artists. They are kind of spiritual cousins to the increasingly long, fabulously expensive music videos stars like Lady Gaga,  Kanye West and Kate Perry have been putting out. This one supposedly had a budget of about $25,000, a cost that Mazda decided to pick up in a promotional effort.
The plot centers on a star-crossed love affair by members of rival gangs. Moretz is of the Night Creeper’s and Tyler Posey (Teen Wolf) The Daytrotters. The two gangs share a turf, but have it at different times. Night/day—get it?  That doesn’t seem too tenable, so they’re going to rumble, since that is what incredibly hip looking street gangs do after all. Will the rumble wreck this tender new romance?
Romeo and Juliet plots have always been favorites of mine, and everyone involved in this seems to be having fun, but, at the same time, as a small low-budget project you get the impression that no one is really extending themselves here. Inherently enjoyable, but disappointingly rote. Wonder what Eddie O’Keefe could have come up with.
I’ve read that this is only part of an 11 minute short film version that will come out next week. Will let you know if/when that materializes. (edit: extended version now up, and featured) Until then, check out a bunch of supplemental material.
MTV
LIKE TWEET