Scenes From the Suburbs

A band of teenage friends struggle to find their place in a tumultuous militant world in this short film by Spike Jonze for the indie group, Arcade Fire.
READ REVIEW
Next Previous

Scenes From the Suburbs 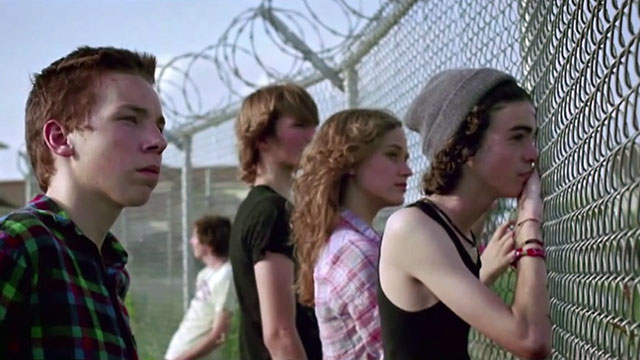 The newest short film from Spike Jonze (I’m Here & We Were Once A Fairy-Tale), is this collaboration with Canadian band The Arcade Fire, co-written by Jonze with bandleader Win Butler and his brother Will, and featuring several songs off the Grammy-winning album “The Suburbs”. The 30 min film confronts some of the themes presented in the album.

First up I apologize to you all. I tweeted the film last night, minutes after it came online via the video streaming service MUBI, but waited to post to the site in order to write my usually verbose review and critical analysis. However in the intervening hours since I watched it, geo-blocking has gone into effect, meaning fans in the U.S., Canada, Australia and Germany can no longer view the film. And apologies to all our fans from outside those areas, but my inability to rewatch the film has sapped my motivation to expound eloquently about it.

I was able to catch it last night however and I recommend it. It’s a coming of age story with a dark pall over it. Care-free teens live in a suburban community. The twist is that all the suburban communities are self-contained LLC’s which frequently go to war against each other, so the periphery of our character’s seemingly idyllic world is filled with checkpoints, helicopters and guns. As is usually the case with Jonze, the conceit is barely touched upon however, in favor of exploring the disintegrating friendship of our protagonist and his best friend as they grow out of adolescence—the harsh adult world they reside in finally intruding in upon the sanctuary of youth. If the Arcade Fire’s previous album “Neon Bible” posited that our culture’s sins would be visited upon us in cataclysmic catastrophe, then this film, standing in for the followup record, exhibits a pessimism of a more subdued sort—our corruption will be internalized, eating us from the inside out, dissolving our families and turning friends against one another.

If you can, check it out soon, because even for those of you who live in the approved areas, the film is online for only today and tomorrow.