A girl finds a mysterious oversized pencil with a creepy grin that can bring anything she draws to life. What can go wrong?
READ REVIEW
Next Previous 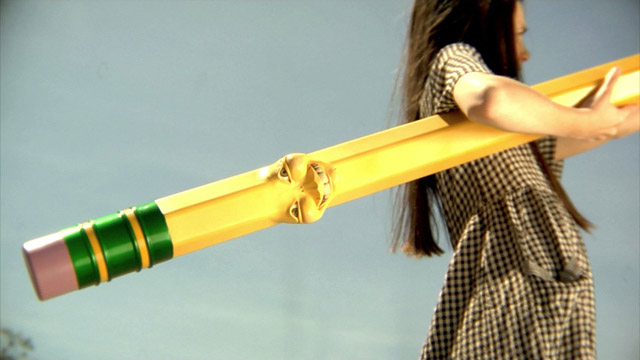 There are well made shorts that can stick in your mind for days, but much rarer is a short that is so God damn creepy it will burrow deep into your mammalian brain and lurk there for years, waiting to creep you out whenever it flits across your conscious mind; Christian Simmons’ Pencilface is the unequivocal poster child of such a short, and a film that in the couple  of years since my first viewing has lost none of its power to unnerve.

A girl plays bored in the scrub grass of some unknown, nowhere place until she meets Pencilface, a giant yellow pencil with the ability to transform drawings into reality. The girl takes advantage of Pencilface’s unique ability until she falls victim to her own desires.

This description whilst wholly accurate, gets no where near conveying just how unsettling a piece of filmmaking Pencilface is. Where filmmakers looking to disturb regularly take us into worlds of shadows and the dead of night, Simmons does the exact opposite, keeping things out in the open under a sunny afternoon sky. There are no jump moments to artificially raise the heart rate and pump us full of adrenaline. Rather in keeping with the tone of a morality tale, things go bad for the girl as her greed takes hold . On first view, I did wonder why she didn’t run for the hills the second she laid eyes on the maniacal grin of PencilfaceI think it’s pretty clear this is not the kind of pencil you want to be hanging out with. But subsequent views have shown the delicate subtlety in Logan Link’s performance and Simmons’ direction, as the girl moves from curious to opportunistic with a knowing, deeply sly smile as soon as they meet which deepens each time she gets what she wants.

Looking at reaction comments online, outside of being described as a dark version of Harold and the Purple Crayon, Pencilface has inspired diverse readings which range from it being a pedophilia tale, to an allegory of a gluttonous west exploiting the work of Eastern society. However you choose to read Pencilface, it’s a film that will stay with you and perhaps make you weary of wanting too much especially yellow pencils!

There’s also a 96-second Behind the Scenes that’s worth taking a look at.