The Art of Drowning

The simple line-drawn animation of a Billy Collins poem about the insignificant moment when your life flashes before your eyes.
READ REVIEW
Next Previous

The Art of Drowning 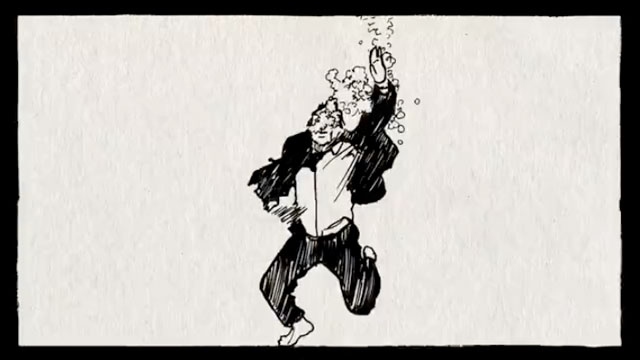 I really enjoy the animated-poem as a form—not only because they are short (which is certainly a virtue) but because of what that shortness requires: a clarity and conciseness of conception, and a strong ability to attune the animation style to the tenor of the linguistic. Diego Maclean’s 2 minute short film treatment of  Billy Collins’ morbidly contemplative poem, The Art of Drowning is, like its source, straightforward: the poem is a simple yet sensitive rumination on a cultural trope, and Maclean’s accompaniment is likewise unadorned and representational. Yet together they both work in tandem to position the viewer into a place of strong personal identification.

Drowning is a visceral, easily imaginable fate for us all, and it is Billy Collins’ curiosity and detachment which ironically allows the listener to let down their guard and accept the invitation to contemplate and mentally envision a sensation we might otherwise dismiss due to anxiety or fear. Maclean’s work amplifies the efficacy of Collins’ words; the slow, peaceful downwards movements held across shots, the shock of the POV segment transporting us out of the water and into the mind, where images transform with stream-of-conscious rapidity are bluntly effective in addition to their plain aesthetic and technical beauty.

Maclean created this short film as his graduation film from the Emily Carr Institute in 2009, and it has wrapped up an impressive festival run, playing at Sundance, Annecy and SXSW among others. You can check out more by this gifted young animator at his personal website.

Spurred by viewing this piece after being exposed to it on Cartoon Brew, I tried to think back to poem-based short films we featured on the website and struggled vainly against memory before remembering that we have a great Archives page that makes such battles unnecessary. I plucked Poem out of the “Genre” column and voila! A killer lineup I must say, including my favorite film of 2008, Mankind is No Island, and another animation featuring the work of Billy Collins, Budapest, from the remarkable 2006 series, Billy Collins: Action Poetry. Please watch those films too if  The Art of Drowning strikes a chord in you.