A girl from a strange family falls prey to her doppelgänger in this surreal animation that resulted from a collaborative script by John Malkovich for Sony.
READ REVIEW
Next Previous 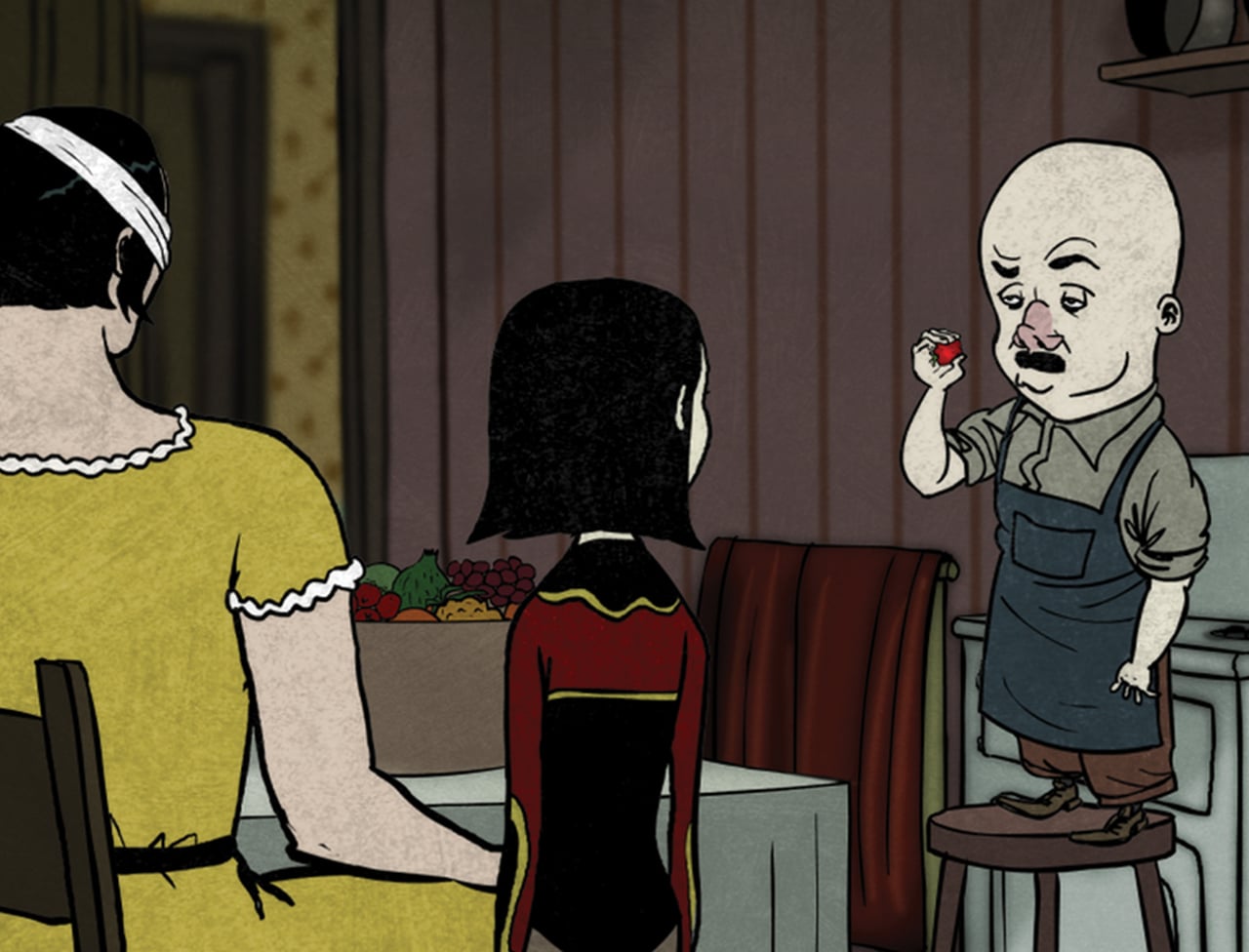 As a general rule (and rather unfairly) I tend to approach films that have developed out of some kind of ‘collaborative competition’ with suspicion, as what often draws me to shorts is the singular vision that comes from an individual driving force. So when I say that this is a policy I shall forthwith abandon in the wake of Laurie J Proud’s mysterious and slightly unsettling Snow Angel, that should indicate how hard I fell for this film.

To set the scene: a girl looks from a window onto a snowy vista, where she ventures to make a row of snow angels. That is until her doppelgänger buries her in the snow and returns to the house, which is populated by circus folk; a midget, a fire-eater, a contortionist and ‘her’ mother who wears a bandage over one eye. The girl is then sent upstairs call the other girls for breakfast, who turn out to be identical to her, and all dressed in gymnast outfits. Meanwhile outside a groundsman and his dog discover the original girl and begin to dig out the snow. The girls lead the doppelgänger down to breakfast, where her mother takes off her clothes to reveal the same gymnast outfit beneath. Then at the urging of the fire-eater, the midget attempts (and fails) to throw a strawberry into the mother’s mouth much to the glee of the onlookers. The doppelgänger runs to the window, through which we can see it is now Spring and the groundsman stands to reveal a white lilly on the spot where the original girl lay.

Summarized as above, Snow Angel appears to lack cohesion, but as the elegant animation plays out in its compelling, yet unfussy style, you find yourself drawn into the world; intrigued by it’s oddities yet happy for them to remain unexplained.

The last place I’d expect a film as off-kilter and Lynchian in its aesthetics as Snow Angel to originate would be as part of an online campaign for a multi-national, but the project’s genesis was from London based digital agency Dare as part of their Online Script Project for Sony VAIO. An initial scene was written by John Malkovich, which was then opened to the public for continuation and completion. Malkovich chose the winning scenes by Wayne Chisnall, Laura Tonini and Arianna Tropeato to complete the script. It then made its way to director Laurie J Proud and a team of animators and fx artists over at animation studio par excellence Sherbet (home to Tony Comely too!— JS). Proud was given a free hand to design the cast of characters and settings for the strange tale, but stuck pretty close to the original story; “I had a lot of visual freedom to design the characters and the whole look. However, I didn’t really change anything about the action as I felt it was my job to stick to the script.”

It seems almost redundant to point out great sound design in animation as that tends to be a given for any effective piece, but the work of Barney Quinton at You Are Hear is truly outstanding and a major part of what kept me in a constant state of unease throughout. I don’t know whose idea it was to use slithering, ghostly voices coupled with intertitles for the dialogue, but it was an utter stroke of genius.

In addition to watching Snow Angel here, you can also head over to the competition site ( www.vaio-john.com) to take a look at the original collaborative script.