The young filmmaker struggles to write his masterpiece in this film that comically combines the story of Shakespeare in Love with endless Star Wars references.
READ REVIEW
Next Previous 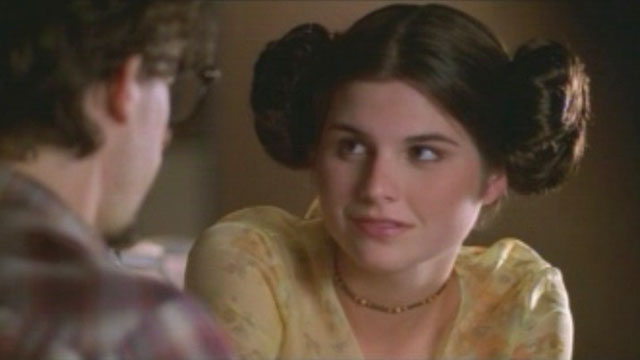 Write what you know. First law of writers everywhere. For struggling film student George Lucas circa 1968, this would prove to be invaluable advice—at least according to the alternate history of this week’s short, George Lucas in Love.

George Lucas in Love is a wry, witty spoof from 1999, swiping the setup from that year’s Best Picture Oscar winner Shakespeare in Love but replacing the bard with George Lucas, still a young film student, frustrated and suffering from writer’s block as he struggles to type out that classic first Star Wars script. Fortunately for us all, the appearance of a pretty young co-ed into his life provides the spark to write again, and like in Shakespeare in Love, George learns to find inspiration for his script in the people and places all around him.

I first discovered the film in 2000 as a bootleg that circulated the Sci-Fi convention crowd. Rightfully so, it was quite popular at the time with Star Wars aficionados and ended up getting  DVD distro from Mediatrip, a DVD which I do in fact own. (Attention short film makers! Never underestimate the lucrative possibilities of playing to geek audiences.) Mediatrip I believe is now defunct though, and the film has become freely available on Google Video.

Being a fan of Star Wars and George Lucas generally helps in enjoying the film but the ubiquity of Star Wars in our culture means you don’t have to stay up at night dreaming about original, “pre-enhanced” Star Wars HD-DVD’s to enjoy the film by any means. The filmmaking itself is far from amateurish: the film won many festival awards in its initial run, and the director Joe Nussbaum has finally broken into Hollywood, directing the new Amanda Bynes vehicle, Sydney White, that comes out later this month. Congrats to Joe! I won’t be watching that movie but thanks for George Lucas in Love!